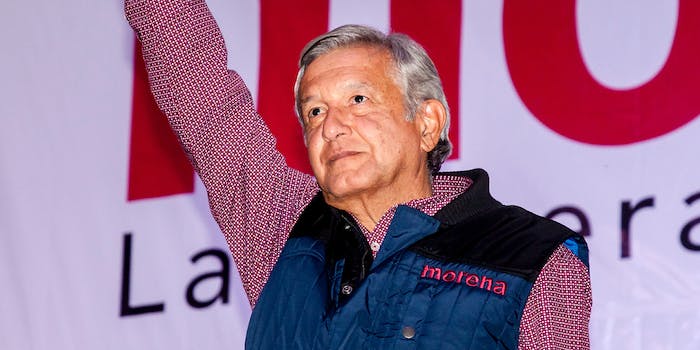 Supporters are frightened a leftist is in power next door.

López Obrador ran on a platform of a strong social safety net, vowing to address poverty, violence, and corruption in a nation that’s been plagued by it.

And now—while a growing Democratic Socialist movement is challenging the American right, Trump’s strongest fans are freaking out from a staunchly liberal threat from the south.

Predominantly, in his campaign, López Obrador called immigration a “human right,” which has far-right conservatives thinking—without evidence—that he plans to flood the United States with criminals.

Those words, if you recall, echo the president’s presidential campaign speech, and Trump’s most notorious fan base. And now that López Obrador won, r/The_Donald, is worried.

Others, who often cite Venezuela as an example of socialist policies creating a failed state, believe that an avowed leftist running the nation next to them will lead to greater poverty, which creates an even more urgent need for Trump’s border wall.

It was a call that echoed throughout the web.

Then there was also the fear that Lopez Obrador would drive Mexico down the path of Nazism.

(It’s somewhat ironic given how much Trump and his supporters have been accused of careening toward fascism.)

While his supporters have decreed this new lefty threat will bring a whole host of new problems to America, President Trump offered his support in a tweet.

Congratulations to Andres Manuel Lopez Obrador on becoming the next President of Mexico. I look very much forward to working with him. There is much to be done that will benefit both the United States and Mexico!