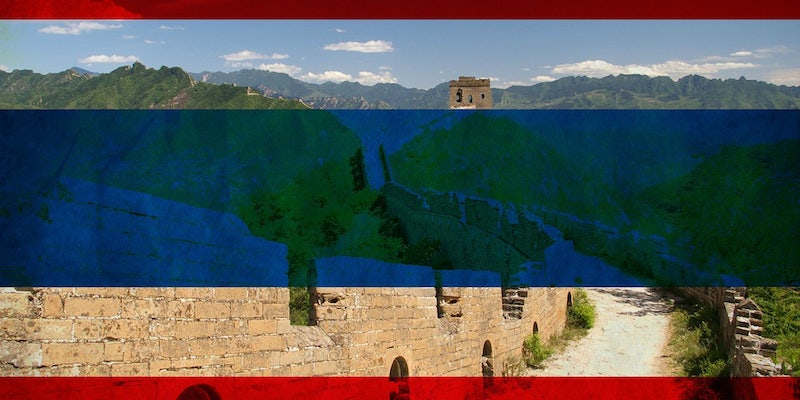 Using the Internet in Thailand might get even tougher.

The Great Firewall may soon extend through Thailand.

Thailand’s leadership is reportedly working on its own version of the Great Firewall, the colloquial name for China’s nationwide method of control over what all its citizens can see online, according to Telecom Asia columnist Don Sambandaraksa.

The proposal seems to have largely gone unnoticed in the West until Twitter user @sikachu found an official statement from Thailand’s prime minister, dated Sept. 4, that referenced a call to look into the legal feasibility of creating a “single gateway,” run by the nationwide Royal Thai Police, that would “serve as a control tool to inappropriate sites and the influx of information from abroad through the Internet.” [Translated with Google Translate.]

And if existing laws prohibit it? Then the cabinet secretary calls “for further legislation to speed up the process to be completed without further delay.”

Thailand’s military junta, which took over in a bloodless coup in 2014, has repeatedly cracked down on dissenting and “offensive” content online, censoring everything from Facebook for a short spell to threatening a five-year sentence to women who post selfies that show underboob.

Even if Thailand does successfully implement a Great Firewall, however, there will surely be ways around it, as is constantly the case in China.