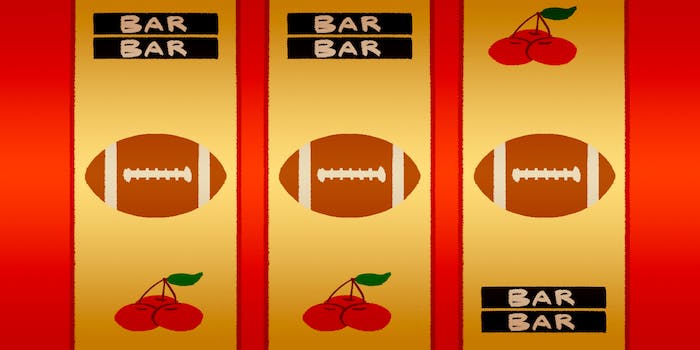 Is this yet another bad omen for DraftKings and FanDuel?

Despite a letter-writing campaign earlier this month in which thousands of Texans pleaded with the state attorney general to leave the daily fantasy sports sites alone, Ken Paxton said Tuesday that participating on sites like FanDuel and DraftKings is not OK.

“Odds are favorable that a court would conclude that participation in daily fantasy sports leagues is illegal gambling,” Paxton said in an opinion, via the Austin American-Statesman.

Though Paxton’s opinion is non-binding—in Texas, the courts have the final say over what’s legal—the attorney general’s words continue a theme across the country in which a number of states are grappling with how to handle the DFS or have said outright that they’re illegal in their territories.

A New York judge declared in December that the DFS sites couldn’t operate in that state, though an appeals court temporarily overturned that order, and last October, Nevada shut down the industry in its state, joining Arizona, Iowa, Louisiana, and Montana.

Washington state legislators also have introduced a number of bills that range the gamut from making all fantasy sports legal to taking FanDuel and DraftKings out of its citizens’ lives.

In Texas, the law states that betting on sports is illegal, but FanDuel and DraftKings have largely gotten around that in this country by claiming that their contests are games of skill and not games of chance.

“It is beyond reasonable dispute that daily fantasy leagues involve an element of chance regarding how a selected player will perform on game day,” Paxton said. “The participant’s skill in selecting a particular player for his team has no impact on the performance of the player or the outcome of the game.”

Paxton also said that “Texas law only requires ‘partial chance’ for something to be gambling; it does not require that chance predominate.”

Paxton’s point is that if “the house takes a cut” of the action, it’s illegal in Texas. That also would explain why an informal fantasy league involving friends and acquaintances would be legal, since theoretically there’d be nobody taking a cut.

Said Peter Schoenke, the chairman of the Fantasy Sports Trade Association, in a statement: “If Attorney General Paxton is truly concerned about the small businesses that operate in Texas and the millions of people in Texas who enjoy fantasy sports, he would stop grandstanding and start working with the FSTA and the Texas Legislature on common sense consumer protection issues like those being proposed in Massachusetts, Florida, Indiana, Illinois, California, and other forward-looking states.

“Paxton’s deliberate misinterpretation of existing Texas law represents the type of governmental overreach that he himself professes to reject. The FSTA vehemently opposes today’s opinion.”