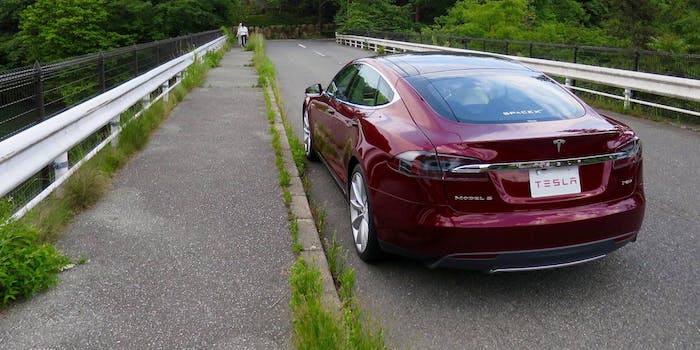 This has to be seen to be believed.

We know the Tesla all-electric Model S P85D is fast, but how does it fare against BMW’s hybrid i8?

Well, the drag racing fanatics at Drag Times wanted to find out just that. The team did a not-entirely-legal drag race on public roads to see which car could out-accelerate the other.

With the Model S P85D’s all-wheel drive and super-fast mode, it generated upwards of 700 horsepower. It was just too much for BMW’s i8, which stood around 357 horsepower.

But the i8 does have a sleeker and more aggressive design. It’s designed more for the track as opposed to going really fast in a straight line. Maybe it can outpace the P85D at Willow Springs? Or maybe the power difference might simply be too much for the i8 to overcome.

With BMW investing aggressively in hybrid technology, we wouldn’t be surprised if the company already had a P85D competitor in the works. Tesla may become a threat for the Ultimate Driving Machine as it has already unveiled the Model 3, a direct competitor to BMW’s 3 Series. Not only that, but Tesla is also upping the ante by adding a ludicrous mode to its new flagship, the P90D.

The Germans better watch out, because the Americans are coming on a bed of laptop batteries.