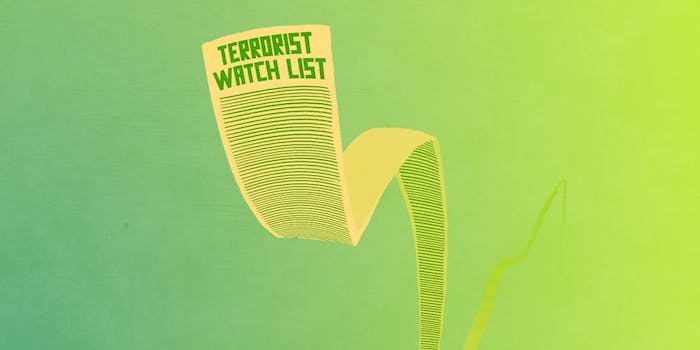 Why the Orlando shooter was removed from a terrorist watch list

Those on 'the list' can still legally purchase firearms.

By the time the Orlando shooter opened fire in an LGBT nightclub early Sunday morning, killing at least 50 people and injuring 53 more, he was no longer on the FBI’s terrorist watch list.

Not that it would have mattered—placement on “the list” does not preclude a person from legally purchasing a gun. But how did he wind up on the list? Why was he taken off? And what is the terrorist watch list, anyway?

The FBI placed Omar Mateen on its terrorist watch list in 2013, when agents first questioned him about his possible ties to radical groups. The impetus for their questioning, according to an anonymous source who spoke to the Guardian: Mateen told his private security firm co-workers that he knew the Boston Marathon bombers, Tamerlan and Dzhokhar Tsarnaev. After questioning, investigators determined Mateen faked the connection, had broken no laws, and didn’t pose a national security threat.

The FBI interviewed Mateen again in 2014 in connection to Moner Muhammed Abusalha, a fellow Floridian who became a truck bomber in Syria that year, and who Mateen had allegedly been in contact with. Once again, investigators determined the contact was minimal, Mateen had broken no laws, and did not pose a national security threat.

After the FBI closed both investigations, according to the LA Times, it removed Mateen from its list, known as the Terrorist Screening Database (TSDB). Though placement on the TSDB wouldn’t have prevented his gun purchase, the bureau would have at least been alerted and possibly watched him more closely as a result.

What is the Terrorist Screening Database?

Prior to the establishment of the Terrorist Screening Center (TSC) in 2003, the federal government relied on nearly a dozen terrorist watch lists, which were maintained by numerous federal agencies. The TSC replaced the fragmented system with the TSDB — a unified list.

For years, there was very little information available about the actions that could put a person on the list, much less remove them. In July 2014, however, the Intercept published a set of internal rules, dated March 2013, that partially exposed the process of inclusion. While committing or planning to commit “violent acts or acts dangerous to human life, property or infrastructure” or kidnapping the president are some sure-fire ways to end up on the list, not all pathways are so obvious. For instance, tweets could potentially land a person on the list.

While “first amendment protected activity alone” cannot warrant inclusion on the list, such as  “postings on social media sites,” according to the guidelines, postings “should not automatically be discounted.” Instead, the nominating agency “should evaluate the credibility of the source, as well as the nature and specificity of the information,” the guidelines say, “and nominate even if that source is uncorroborated.”

On the day of the September 11 attacks, the government’s list of people barred from flying included 16 people, according to the Intercept. By 2009, agencies made a staggering 227,932 nominations for the TSDB—a number that more than doubled by 2013, in which there were 468,749 nominations.

The government has been widely criticized for its secrecy surrounding who is on the TSDB and how one can be removed from it. On that front, the guidelines don’t do much clarifying.

If a person discovers that he or she is on a watch list, possibly by having gone to the airport for a flight and being denied entry, that person can file a complaint through the Department of Homeland Security Traveler Redress Inquiry Program. The complaint then sparks an internal review, in which all agencies that have contributed information on the watch listed person must agree on removal, according to the Intercept. But the subject is not informed of the results of the subsequent internal review — if they’ve been removed.

The guidelines say that “the general policy of the U.S. Government is to neither confirm nor deny an individual’s watchlist status.” And when it comes to removal, sometimes death doesn’t even do the trick. The guidelines state that because terrorists sometimes assume the identities of deceased associates, wiping a name isn’t necessarily granted posthumously.