This 13-year-old made a DIY version of Google Glass

Shut up and take my lunch money!

It might not look as slick, but 13-year-old Clay Haight’s homemade Google Glass probably saved him a whole lot of money. And who could ever accuse this enterprising little genius of being a Glasshole?

Haight has been tinkering with electronics and robotics since he was 8, according to Make magazine, and recently saved up for his own Printrbot Simple, a small 3D printer that was originally funded on Kickstarter. But his real tour-de-force has to be this DIY Google Glass contraption, with its 3D-printed frame, Arduino LCD screen, and Arduino Esplora sensors. Haight can bring up his calendar, local maps, and temperature and weather information with a few simple voice commands, just like a pared-down version of Glass. 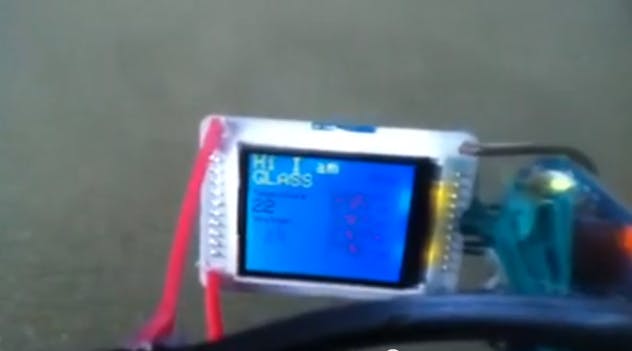 A headband around the back of the headset keeps the whole contraption in place, Haight told Make. “Now they are extremely comfortable,” he said.

The headset even displays a cute little welcome message: “Hi I am Glass.”

Fine, it can’t make phone calls or record things surreptitiously, but give it time. By age 15, Haight will probably have mastered the iPhone, too.