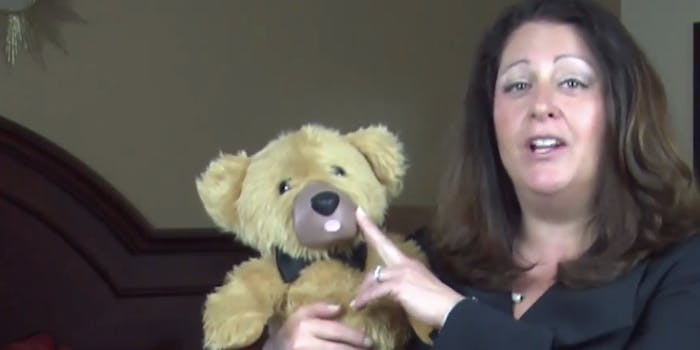 This adorable stuffed bear on Indiegogo is actually a sex toy

Warning: Some of the language below is NSFW.

Marketed with the creeptastic tagline, “You’ve grown up. Now your teddy has too,” the bear has a 10-speed motor in his muzzle, and speed controls in his fuzzy little ears. Simply sit on Teddy’s innocent little face and stare into his guileless, pleading button eyes as his nose stimulates your clitoris and his tongue penetrates your vagina, and you can have a shrieking, messy orgasm all over the face of your most precious childhood memories.

Or, as Harmon says in the video, Teddy Love is intended as a discreet sex toy that can seamlessly blend in with your home or work environment.

“Have you ever seen someone walking through an airport, in a restaurant, or in a place of business, with a large adult toy visibly protruding through a handbag or briefcase?” Harmon asks, describing something that literally no one in the history of the world has ever seen ever.

“Our novel and discreet product can be displayed anywhere, inconspicuously, without fear or embarrassment.”