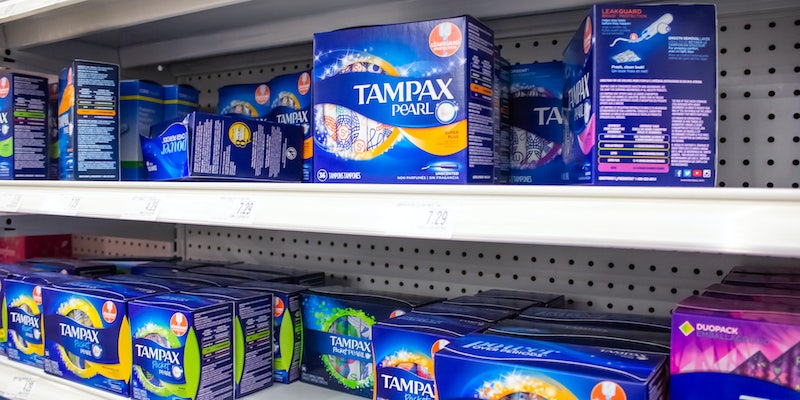 A risqué tampon joke has some people seeing red.

A joke about tampons has inspired a campaign to boycott Tampax.

On Monday, the company tweeted from its verified account, “You’re in their DMs. We’re in them. We are not the same.”

The lighthearted, if dirty, joke surprisingly launched a campaign to cancel the world’s oldest commercial tampon brand. The #BoycottTampax campaign appears to be inspired by transphobia over Tampax hiring nonbinary people for an ad campaign months ago.

Initial responses to Tampax’s joke were overwhelmingly positive and heavy on the puns.

“Tampax out for blood,” commented @AngelaBelcamino. @taradublinrocks quipped, “I no longer need their products, but that’s a great plug for their account.”

The risqué tweet attracted hundreds of thousands of likes and tens of thousands of comments and retweets, but seemed fated to pass into the online ether. Then on Tuesday, Tampax once again found itself on the internet’s center stage.

#BoycottTampax trended on Twitter throughout much of the day.

Tweets that used the hashtag included ones bashing Tampax and the Phluid Project for hiring nonbinary people for an ad campaign.

One Twitter user claimed that the campaign “is designed intentionally to gaslight, abuse and destabilize women & girls.”

Others took issue with Tampax using the gender-neutral “their” instead of “her” in its tweet. (Though it is true that some transgender men and nonbinary people also get periods, Tampax could’ve also simply been using “their” in the plural sense.)

Prominent right-wing accounts were naturally the loudest complainers about the presumptively gender-neutral tweet. It inspired a few to resurface Tampax’s tweet stating that “not all women have periods” and “not all people with periods are women.”

However, it wasn’t just right-wingers who were mad. A person who describes themselves as a feminist in their bio opined that Tampax’s DM joke is “peak patriarchy” and accused it of insulting “its entire customer base.”

Other self-described feminists made similar complaints.

Many people pushed back on the outrage over Tampax’s tweet.

“Has anyone else noticed that the people screaming #BoycottTampax aren’t really upset about the joke?” @Elepitts1997 pointed out. “They’re actually a bunch of transphobic bigots attacking a company that showed support for a group of people they like to be cruel to.”

One Twitter user succinctly summarized the #BoycottTampax campaign: “1. y’all can’t take a joke 2. y’all are being transphobic and overly sensitive.”