"Kids will be Kids?"

The St. Louis police have posted—and subsequently deleted—about the death of 12-year-old Tamir Rice, implying that the responsibility to keep cops from shooting kids lies with their parents alone.

Rice was shot by a police officer on Nov. 22 by a Cleveland Police Officer while he held an Airsoft pistol. Beginning with a rhetorical “Kids will be kids?,” the Facebook post by the St. Louis Couty Police City of Fenton Precinct says the Precinct hopes to “[make] residents aware of a ‘hot’ topic and learning from this incident, so Fenton never loses a child’s life.” 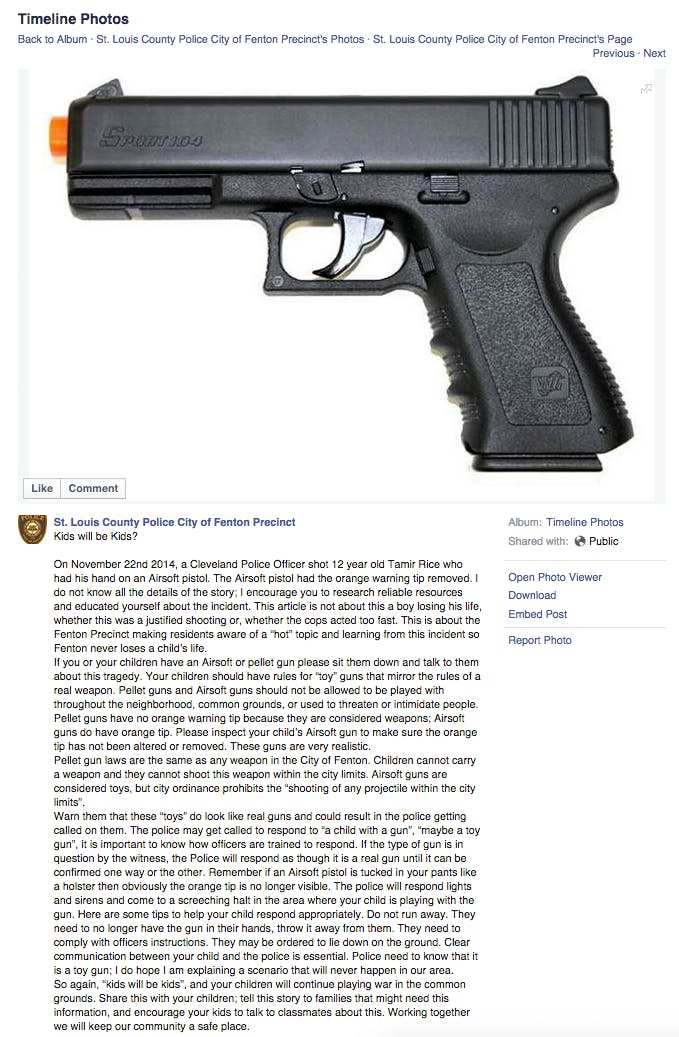 The post has since been deleted, and Guardian reporter Jon Swaine reports it was written by officer Aaron Dilks.

The post comes as police shootings are in the spotlight: A St. Louis grand jury recently declined to indict officer Darren Wilson for the fatal shooting of unarmed black teenager Michael Brown (a decision that caused months on community tensions to spill over into violent riots), and on Tuesday a New York grand jury decided against indicting Daniel Pantaleo, who placed the unarmed Eric Garner into a chokehold, leading to his death. Garner repeatedly said “I can’t breathe” as he was being restrained, and the decision has sparked protests in the city.

Update 11:45am ET: Speaking with Mediate, Dilks explains his reasons for the post, and says he played with toy guns when he was a kid, too.

“I too was a kid, and I too would have done the same thing as Tamir Rice did,” Dilks said. “I was allowed to go play with guns, and have BB guns—we didn’t have Airsofts at the time. The point of the ‘kids will be kids’ is that’s what kids will do…The point of putting [the post] out was to educate and make sure something like this doesn’t happen in the city of Fenton or in our area.”

Update 5:00pm ET: In a separate statement, the St. Louis County Police apologized to anyone who was offended by the earlier post, and reiterated its intent to increase public safety: