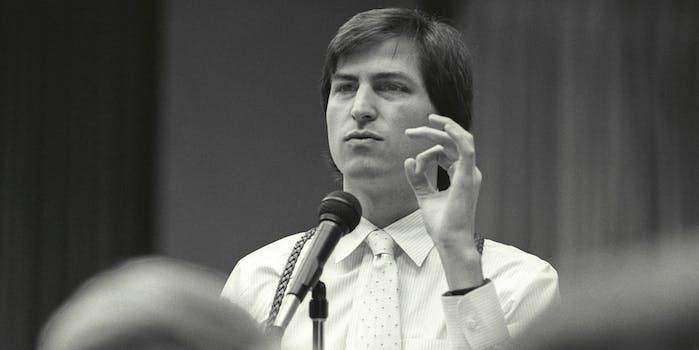 The watch wars are far from over.

Steve Jobs was, and still is, one of the most iconic figures of the consumer tech industry, and his legend lives on in many ways. Now, his words have been immortalized as a trademark, but not by Apple.

Swiss watch manufacturer Swatch has taken it upon themselves to appropriate one of the longtime CEO’s most famous phrases: “One more thing.”

Typically used just before a large product reveal at the end of many Apple press events, the “One more thing” tagline was started by Steve Jobs in the late 1990s and carried for many years. The most recent use came from current CEO Tim Cook just before he officially confirmed Apple’s entry into the smartwatch market:

Apple is working hard to disrupt the wearable industry with the Apple Watch, and while traditional watchmakers at first brushed off the smartwatch movement as a trend, many—including Swatch—have launched smart wearables of their own.

Apple and Swatch already had bad blood before this little jab. The Swiss company did everything in its power to make it more difficult for Apple to launch its Apple Watch, including preventing Apple from using the iWatch name thanks to its own copyright of the name “iSwatch.”

A competitor trademarking the catchphrase of a now deceased ex-CEO isn’t sitting well with many Apple fans. A dispute over the trademark could still kill it off, though how such a dispute would pan out is anyone’s guess.