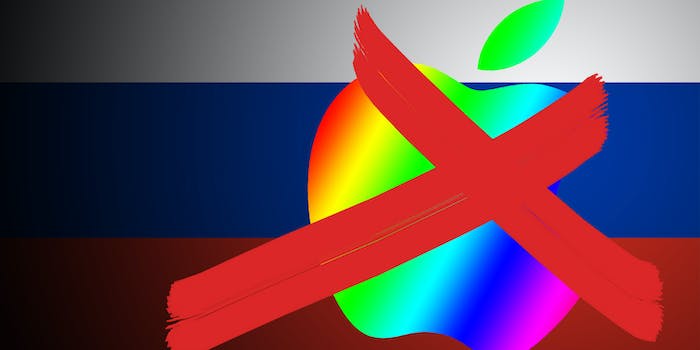 Following Apple CEO Tim Cook’s announcement that he is gay, a Russian monument dedicated to the late cofounder Steve Jobs has been dismantled over claims the tech chief is “[calling] for sodomy.”

Last week, Tim Cook published a personal essay in BusinessWeek, in which he declared that he was “proud to be gay,” and considered it “among the greatest gifts God has given” him. His sexuality was known within tech circles prior to his “official” announcement, and he had long been a vocal proponent for LGBT rights.

Cook explained in his article that he finally made the decision to come out publicly when he realised that, “if hearing the CEO of Apple is gay can help someone struggling to come to terms with who or she is, or bring comfort to anyone who feels alone, or inspire people to insist on their equality, then it’s worth the trade-off with my own privacy.”

In 2013, Russia brought in laws banning “homosexual propaganda” that are widely condemned as homophobic and discriminatory. The company responsible for the erection of the statue, the Western European Financial Union (ZEFS), said “Russian legislation prohibits propaganda of homosexuality and other sexual perversions among minors,” and that it had taken down the statue because “Apple CEO Tim Cook publicly called for sodomy”—making the deconstruction of the statue “pursuant to Russian federal law.”

The statue had was erected in 2013 on a St. Petersburg university campus, the Washington Post reports. It was shaped like an iPhone, and was intended to commemorate Steve Jobs, who was a cofounder of Apple and the company’s CEO until his death in 2011.

One news agency is reportedly contradicting ZEFS’s claims that removal has anything to do with Cook’s sexual orientation, however. Prior to Cook’s “coming out,” the company reportedly informed reporters that the statue was due to be taken in for repairs. It may well be that the timing is coincidental—or that ZEFS has seen an opportunity to court favor with the Kremlin.