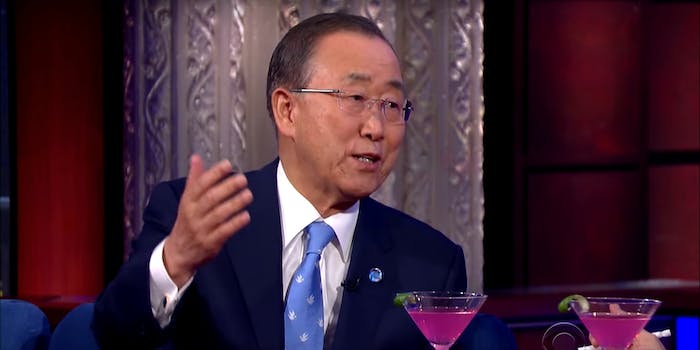 Stephen Colbert tries to get the U.N. secretary-general to dish on misbehaving leaders

If this is all he can say, we can only imagine what else has happened at the U.N.

If Stephen Colbert’s southern charm can’t get a guest to open up, maybe some alcohol will do it.

Colbert was desperate to get Ban Ki-Moon, the United Nations secretary-general, to divulge surreal stories of diplomats and world leaders misbehaving behind closed doors. But Ban had to be diplomatic himself—he’d be meeting with some of those leaders once he was done with Colbert.

But once Colbert peppered Ban up with a fruity martini, he shared a tamer (but still fairly wild) story about former Libyan dictator Muammar Gaddafi speaking on the U.N. floor so long that his translator passed out.

You know what Colbert’s doing once Ban retires.