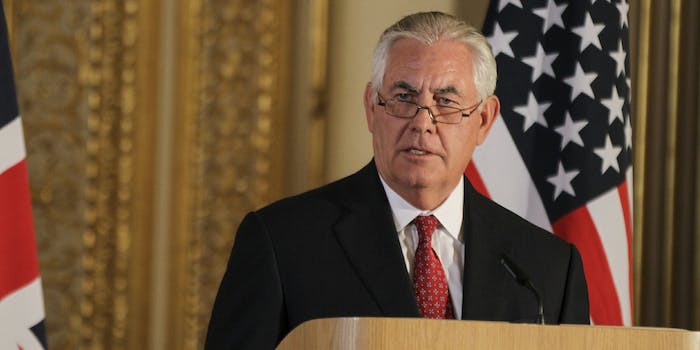 She did not hold back.

With Secretary of State Rex Tillerson reportedly on shaky ground with President Donald Trump, at least one former State Department employee believes Tillerson should leave his job. And she said so in a resignation letter that’s reverberated around the internet for its blunt criticism and pointed advice.

Elizabeth Shackelford, who Foreign Policy reported “was seen as a rising star at the State Department,” told Tillerson in the letter that she was quitting because the administration didn’t care about human rights and because it had shown “disdain” and “stinging disrespect” for the department’s work.

She also had some career advice for Tillerson.

Shackelford, who was based in Nairobi to help the U.S. efforts in Somalia, told Tillerson “to stem the bleeding by showing leadership and a commitment to our people, our mission, and our mandate as the foreign policy arm of the United States. If you are unable to do so effectively within this Administration, I would humbly recommend you follow me out the door.”

Shackleford also wrote in her letter she was “shocked” when Tillerson said that sometimes human rights are a barrier to advancing the country’s economic agenda.

The criticism of Tillerson and the State Department is not new. He’s implemented a hiring freeze so he says he can make the department run more efficiently, and with plenty of diplomats leaving, the morale at the department is reportedly terrible.