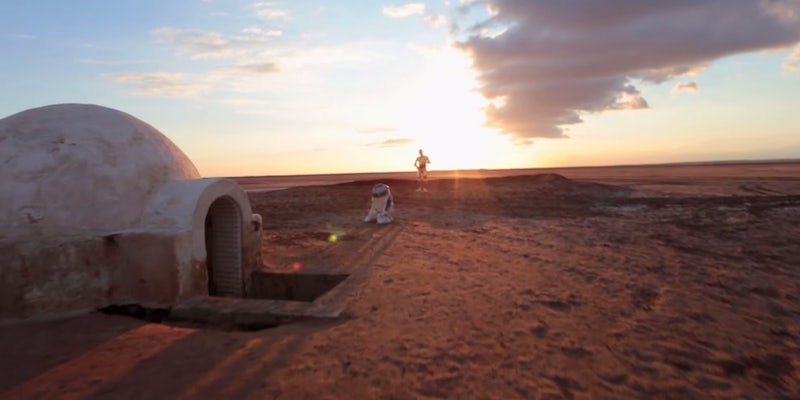 This will put a damper on tourism for the foreseeable future.

Islamic extremists scored a public-relations coup on Tuesday after seizing the city that gave its name to Luke Skywalker‘s home planet in the Star Wars films.

Fighters with the Islamic State of Iraq and Syria (ISIS), which calls itself the Islamic State, are using the southern Tunisian city of Tataouine as a way station in their fight to control the entire Middle East. Tunisian authorities recently found two caches of weapons, including rocket-propelled grenade launchers and a massive stockpile of ammunition, in the city, which is located 60 miles west of the Libyan border.

ISIS has been seizing territory left and right in its quest to establish a regional caliphate (Islamic government). Experts estimate that the group controls one third of Syria, and the poor security situation in Iraq has led to easy gains there as well. But ISIS’s seizure of Tataouine has generated breathless mainstream media coverage because the small Tunisian city inspired the name of the Star Wars planet Tatooine, where both Anakin Skywalker (aka Darth Vader) and his son Luke were both born.

You may remember Tatooine’s endless desert from this iconic scene in 1977’s Star Wars Episode IV: A New Hope.

Although George Lucas didn’t film any scenes in Tataouine, he did film nearby for 1999’s Episode I: The Phantom Menace. Several other Tunisian locations hold even greater importance to Star Wars fans, including Sidi Bouhlel, where Obi-Wan Kenobi rescued Luke from Tusken Raiders, and Hôtel Sidi Driss, where Luke lived with his aunt and uncle.

J.J. Abrams, who directed this year’s Star Wars sequel The Force Awakens, did not return to Tunisia to shoot sand-planet scenes., instead opting for Abu Dhabi.

Prior to the outbreak of unrest surrounding ISIS’s rise, Tunisia had embraced its reputation as a mecca for Star Wars fans. The country’s tourism office partnered with the national Star Wars fan club to create a campaign linking the space-fantasy franchise with the Middle Eastern nation.