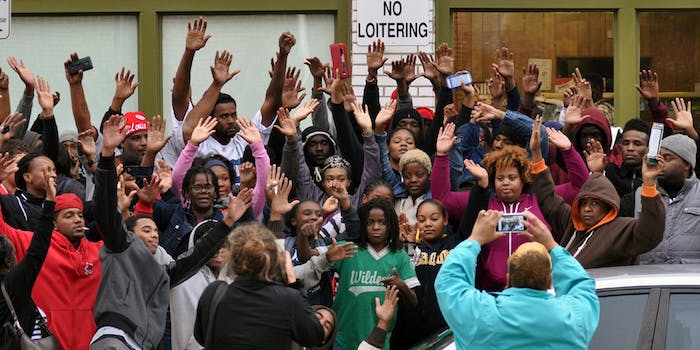 Five Rams players staged a protest during their game on Sunday in support of Michael Brown—prompting the St. Louis Police Officers Association (SLPOA) to angrily demand the athletes be “disciplined,” and that the NFL publicly apologise.

In a match against the Oakland Raiders on Dec. 1, five St. Louis Rams players (Kenny Britt, Stedman Bailey, Jared Cook, Tavon Austin, and Chris Givens) entered the field with their arms held aloft in the “hands up, don’t shoot” gesture, which has become a defining feature of the protests over the fatal shooting of unarmed teenager Michael Brown by officer Darren Wilson in Ferguson—a reference to eyewitness accounts claiming Brown had his hands raised in surrender when he was shot.

Brown’s death in August sparked protests and months of unrest, which were rekindled earlier this month by at St. Louis grand jury’s decision not to indict Wilson for the shooting. The officer has subsequently resigned from the police force.

The gesture was made both prior to the game and again after Tre Mason scored a touchdown. Protests were also held outside the stadium.

Kenny Britt has also posted a photo to his Instagram account making clear his support for Brown, and captioned with “This game was dedicated to #MikeBrown, his family and the Community of #Ferguson.”

This game was dedicated to #MikeBrown , his family and the Community of #Ferguson . #WeStandWithYou #MikeBrown #MyKidsMatter #HornsUp

The response from the SLPOA has been highly critical, condemning the protest as “tasteless, offensive and inflammatory.” The protest is “hypocritical,” SLPOA business manager Jeff Roorda said, because “All week long, the Rams and the NFL were on the phone with the St. Louis Police Department asking for assurances that the players and the fans would be kept safe form violent protesters.”

The SLPOA is calling the five players involved to be “disciplined,” and for both the Rams and the NFL “to deliver a very public apology.”

If they do not, Roorda warns, the SLPOA may lead a boycott of NFL sponsors. “I’d remind the NFL and their players that it is not the violent thugs burning down buildings that buy their advertisers’ products. It’s cops and the good people of St. Louis and other NFL towns that do.”

Update 11:15am ET, Dec. 1: CNN’s Rachel Nichols reports that the NFL says it will not discipline the Rams players:

St Louis Police Assoc asked the NFL to discipline Rams players for their "hands up" gesture. The NFL says they won't. pic.twitter.com/mnHXINy4El