Maybe don't pick your nose while you're Gchatting with your boss next time.

One of the primary critiques of social media platforms is that they depersonalize human interaction and make it impossible for us to forge meaningful connections within the span of 140 characters. But the truth is that people online will often bare their souls in a way they never would IRL: I’ve had more soul-searching, intimate conversations on Gchat, at 2am while inhaling a bag of Milanos and farting in my footie pajamas than I’ve ever had in person.

There’s something about chatting with someone online that feels impersonal and bizarrely intimate at the same time, as if the fact that you and your partner can’t see each other gives you both the freedom to say whatever you want. But what if you could see your chat partner on the other end? And what if you could snap a photo of them in their bedheaded, footie-pajama-ed, Milano-farting glory—without them ever even knowing?

This is the premise of Spyke, an experimental chat platform by developer Kate Ray and artist Holly Herndon. Launched at the Seven by Seven art and tech conference in New York, Spyke is a combination of Gchat and Skype, giving you a momentary glimpse at your chat partner on the other end.

Here’s how it works: You and your chat partner log into the service and start sending each other text messages, as you would on Gchat. But if you click the “take picture” button at the bottom of the screen, you can take a photo of whoever you’re speaking to without their knowledge. (Well, not completely—Spyke requires both partners to authorize access to their webcams when they log in).

With Spyke, you know that someone could take a picture of you. Just not when.

The idea, co-creator Ray told me when I chatted with her via Spyke, is to catch your chat partner completely off guard by snapping a photo of them picking their nose or peeling their split ends or whatever we do when we’re behind a keyboard and think no one’s watching us. “I feel uncomfortable knowing you can see me without knowing what you’re seeing,” Ray says. “There’s a weird tension between privacy and performance.”

She’s absolutely right. While I was using Spyke, I was under the constant impression that I was being watched. At one point, I let my guard down long enough to blow my nose (allergy season), and found myself praying that she hadn’t taken a photo at that moment, even though I actually have no idea whether Ray took any photos of me. (Here’s the one I took of her). 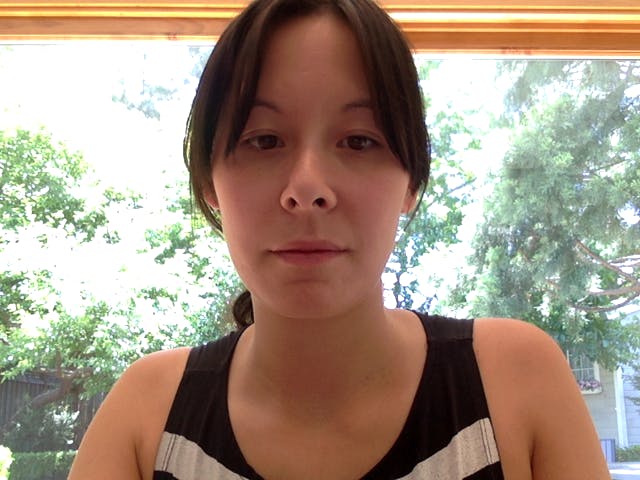 That feeling of unease, says Ray, is exactly what she was trying to create with Spyke. The project was inspired by various intimate online chat conversations Ray and Herndon had had in their lives, such as cyber-flirting on AIM under her “awesome Harry Potter handle” when Ray was in middle school (“then I’d see the same people at school the next day and not say a word to them,” she says). She and Herndon wanted to explore the tension between “privacy, intimacy, and performance” that so often arises with online chat.

Because Spyke literally has the word “spy” in it, the project obviously also conjures up the uncomfortable feeling of being under surveillance, like your privacy is under constant threat of being breached. In this sense, the program serves as an ominous warning to those who adopt a cavalier attitude toward online privacy.

“You are so conscious that you are allowing the other person to invade your privacy, so you can’t claim ignorance, the way many of us do about what platforms do with our data,” says Ray. “So I guess one thing we were going for is that the discomfort of knowing you are being watched, should maybe be something we extend to the other online platforms we use.”

As of now, Spyke is only available online, and the prototype still has a few kinks to be worked out. But Ray says she has bigger plans for the program. (Ideally she’d like to make it a kind of Gchat client, but she’s unsure how feasible that actually is.) But even if the idea of being caught on camera during an unflattering moment doesn’t quite catch on with hyper-self-conscious, selfie-loving teens, the project is a fascinating commentary on issues of surveillance, privacy, and the intimacy of online relationships. If nothing else, it’s certainly made me think twice about blowing my nose or eating Milanos or farting on Gchat—even if you think no one else is watching, you never quite know who’s on the other end.