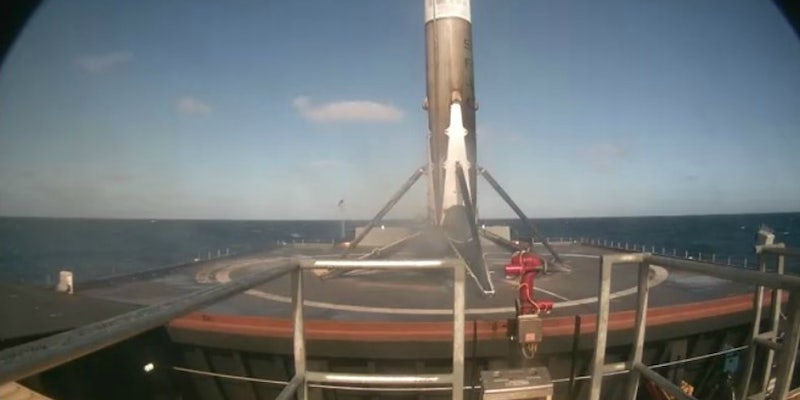 For the first time since its rocket exploded last September, SpaceX took another leap forward into space travel Saturday, successfully launching its Falcon 9 and then landing it on a drone ship.

Watch as the first stage of the rocket returns to flight and then lands perfectly on the deck of the ship named Just Read The Instructions.

Aside from the explosion four months ago, SpaceX has been successful at recovering the first stages of the rockets it sends into space, using these drone barges that communicate with the rocket itself to coordinate where it will land. As for why that’s important, TechCrunch explains:

Recovering these stages is key to SpaceX’s mission of bringing down the cost of space flight, which serves its larger goal of making humanity an interplanetary species. SpaceX currently charges around $60 million on average for a launch, which is drastically less than its competitors in the commercial spaceflight industry—but it enjoys only very thin margins on each launch as a result.

Re-using Falcon 9 first stage components for multiple missions would greatly increase its ability to make money on each individual launch, since you don’t have to then build an entirely new rocket every time you want to send something into space. SpaceX isn’t yet re-using the first stage Falcon 9 rocket sections it recovers, but it is studying them to help maximize the efficacy of the recovery process, and it said today that it plans to run its first mission with a recovered rocket stage sometime “soon.”

This is the seventh time SpaceX has successfully recovered a rocket.