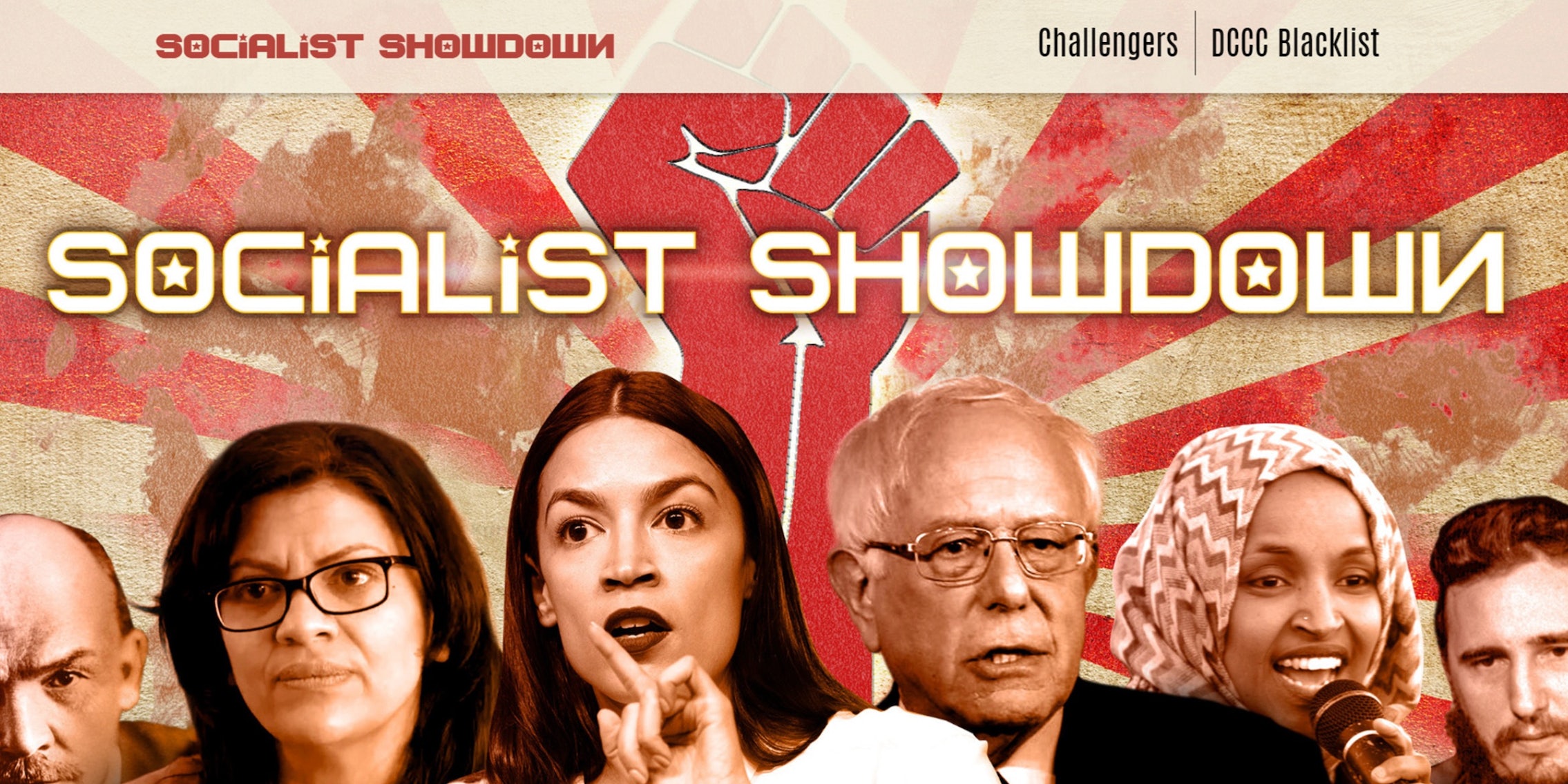 Why did the GOP launch a website hyping socialist candidates?

Will the transparent ploy be recognized as such?

Amid all of the drama between the progressive “squad” of four congresswomen, President Donald Trump, and House Speaker Nancy Pelosi (D-Calif.), a vital piece of news slipped through the cracks early last week: Republicans made a website pretending to promote socialism.

The NRCC is rolling out our new Socialist Showdown website! Read all about the socialists challenging incumbent Democrats and the ensuing chaos as @CheriBustos and the @dccc blacklist folks on the left! https://t.co/r5w6GJ43TW

On July 15, the National Republican Congressional Committee (NRCC), rolled out a website with the URL socialistshowdown.com. The site is aimed at allowing you to “read all about the socialists challenging incumbent Democrats and the ensuing chaos as @CheriBustos and the @dccc blacklist folks on the left!.”

The NRCC is a political committee devoted to increasing the number of Republicans in the U.S. House of Representatives and is the strategic voice when it comes to GOP House races. Perhaps, we dare say, this website was not created in good faith.

“Socialist Showdown” site is aimed at amping up the discord between the establishment wing of the Democratic Party and insurgent candidates, and groups like Justice Democrats, Our Revolution, and the Democratic Socialists of America that support them.

“Speaking of socialism, be sure to check out the NRCC’s new Socialist Showdown website, highlighting the socialist Democrats’ civil war and the DCCC’s ham-handed efforts to blacklist folks on the left.” The site even includes links to donate to insurgent progressive candidates.

The mobile version of the site features a not-so-subtle background of a hammer and sickle.

On the site, there are two tabs. One reads “DCCC Blacklist” and hosts links to articles about how the DCCC (the RNCC’s Democratic Party opposition) has threatened to blacklist consultants who work for insurgent candidates, as well articles about Democratic disunity from various publications. As the Intercept reported in March, “[The DCCC] warned political strategists and vendors… if they support candidates mounting primary challenges against incumbent House Democrats, the party will cut them off from business.”

The most recent articles on the site detail the conflict between Pelosi and the Squad that has run all over the media.

The other tab, “Challengers,” features a list of insurgent candidates who would potentially be subject to DCCC blacklisting. Some, like  Rep. Dan Lipinski’s (D-Il.) challenger Marie Newman might be familiar to progressives. Others like Nathan Clay, who is challenging Rep. Ed Perlmutter (D-Colo.) from the left, have a modest profile and don’t yet enjoy the support of any of the insurgent groups the NRCC professes to be attacking.

Looking at the “Socialist Showdown” website, the big question is, “Who is this for?” Progressives and leftists will look at the site, with its propagandistic attempts to compare Castro and AOC and Cold War parody graphic design and see that it is a front. Centrist liberals likely wouldn’t click on it. Perhaps it is just for Republicans to look at and get mad?

There’s also a matter of strategy. Perhaps the RNCC wants to give a boost to candidates it thinks would be better positioned to defeat in a general election. The problem is that there isn’t necessarily data to support this. While Our Revolution and Justice Democrats candidates have trouble winning their primaries in deep-blue districts with strong Democratic establishment machines, when they do win those primaries, those districts still tend to vote Democrat.

Yes, Our Revolution, Justice Democrats, and DSA had their share of electoral losses during the midterms, but if you look at candidates like Randy “Ironstache” Bryce in Wisconsin or Jess King in Pennsylvania, the candidates seemed to perform as well or better than a mainstream Democrat likely would have.

One race that followed the ideal model of a progressive insurgent winning the primary and losing a winnable general election was Ben Jealous, who lost the Maryland governor’s race to Republican incumbent Larry Hogan. However, that situation feels more like the exception than the rule. Hogan was very popular, and prominent center-left Democrats in the state consciously opposed him for months leading up to the election. Perhaps most importantly, Jealous adamantly rejected the “socialist” label.

Despite some heartbreaking general election losses, the Democrats won the House back in the midterm election in which these insurgent groups were active. So why do Republicans think this will be an effective strategy?

Politico called it “a ploy to try to foster primary challenges for House Democrats.” Fair enough. But, the NRCC’s own press release cited an internal poll the Democrats pedaled through Axios that showed socialism is unpopular.

The poll has received criticism for its methodology from journalists and data experts. The poll, per Splinter, “was two months old and focused on 1,003 white people with two years of college experience or less.”

I asked top Democratic pollster Celinda Lake of Lake Research what she made of the results of the poll of white, non-college voters that Axios published. Here are her points:

1. "It shouldn't have been reported on. It violated all the standards for publication…

If there is no data to support that insurgent candidates are particularly weak against Republicans and tarring Democrats as “socialist” hasn’t been particularly effective, what does the NRCC stand to gain here?

The Daily Dot reached out to the NRCC and its communications team and did not receive a response.

From what we can see, NRCC’s disinformation campaign is off to a rocky start. The comments on its rollout of the website range from “It’s hilarious you think that socialism isn’t popular” to “You must understand – most people hate the Republicans most of all.”

Hell yes thank you to the NRCC this is very handy https://t.co/xXa0iaQAhZ

However, over on the NRCC Facebook page, there is a different story. Unlike Twitter, we can assume that those engaging with the group’s Facebook page are loyal conservatives. The page recently launched a poll asking “What do you think is the better option: freedom or socialism?” With 3,000 votes, “freedom” is winning with 96% of the vote.

If the goal is to rile up their base against socialist candidates, perhaps “Socialist Showdown” will bear fruit. If it’s trying to bring chaos to the Democratic party, the transparent ploy set forth on this website probably isn’t going to do the trick. If the NRCC thinks that progressive and socialist candidates will be easier to beat in a general election, it should look more closely at the midterm results.