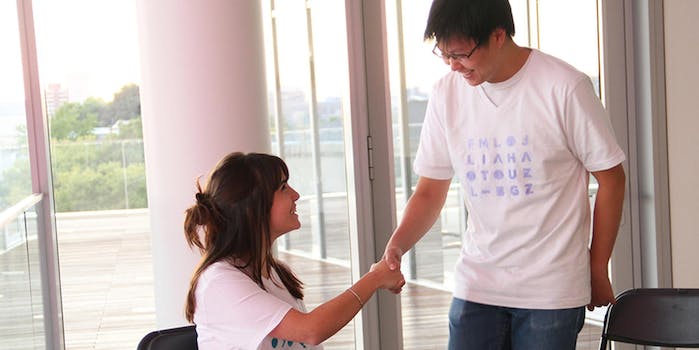 This high-tech shirt forces you to talk to strangers

Prepare to be social.

We all have that one super social friend who wants to introduce us to everyone they know, no matter where we happen to be. “You guys have so much in common!” they always insist, trying fruitlessly to merge all their friends into one massive unit. MIT students just invented a shirt that acts just like that friend, and it’s coming to pull you out of your introvert shell.

The team behind the project—comprised of students from MIT’s Tangible Media Group and Fluid Interfaces Group—calls the creation “Social Textiles.” What they’ve invented is basically a T-shirt with an electronic twist. A special ink, motor, sensors, and various other tiny hardware bits combine in a single piece of apparel that connects via Bluetooth to a smartphone app.

On the shirt are various words, symbols, or other icons that represent something the wearer likes—for example, “football.” When another person wearing a Social Textiles shirt is within 12 feet, and happens to have an interest emblazoned on their shirt, the collars of both shirts vibrate. To determine which of the many words matched the two, the users simply high five and it lights up.

And from there, the conversation is supposed to flow. It’s probably just as awkward as anything else, but hey, it’s high-tech.

But, if anything, Social Textiles is proof that a social network can exist in the real world, rather than just behind a computer screen.