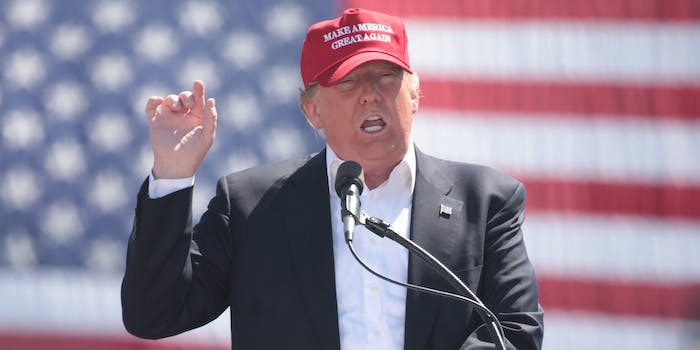 The summary of the executive order was criticized by internet rights groups.

A proposal from President Donald Trump’s administration would put the Federal Communications Commission (FCC) and Federal Trade Commission (FTC) in a greater position to police content on social media—a move that has been fiercely criticized by internet rights groups.

The White House has reportedly been drafting a social media-centric executive order in an effort to address what they allege is an anti-conservative bias among social media companies.

Recently, CNN obtained a summary of a draft of the executive order, which spelled out how the FCC would take on a greater role in policing what is posted online and trying to curb alleged bias.

As CNN puts it:

… the White House draft order asks the FCC to restrict the government’s view of the good-faith provision. Under the draft proposal, the FCC will be asked to find that social media sites do not qualify for the good-faith immunity if they remove or suppress content without notifying the user who posted the material, or if the decision is proven to be evidence of anticompetitive, unfair or deceptive practices.

In the summary, the White House says it received 15,000 complaints about alleged political bias on social media from a portal they launched earlier this year. The summary of the order also asks the FTC to work with the FCC to create a report detailing how companies moderate their platforms and see if it is done in a neutral way, according to CNN.

The summary of the draft order was criticized by a number of internet rights groups.

“These leaks about a potential Executive Order from the White House are troubling on many levels, from the order’s potential to violate the First Amendment, to its apparent disregard for the independence of agencies like the FCC and the FTC, to its intent to unilaterally limit Section 230 which promotes moderated online communities free of hate speech and misinformation,” President and CEO of Public Knowledge Chris Lewis said in a statement. “If these reports are a trial balloon from the White House, then it’s time to pop it.”

“It’s hard to put into words how mind bogglingly absurd this executive order is. In the name of defending free speech it would allow mass government censorship of online content. In practice, it means whichever party is in power can decide what speech is allowed on the internet,” Greer said in a tweet.

It’s hard to put into words how mind bogglingly absurd this executive order is. In the name of defending free speech it would allow mass government censorship of online content. In practice, it means whichever party is in power can decide what speech is allowed on the internet. https://t.co/YHNOAuZ4wO

FCC Commissioner Jessica Rosenworcel also appeared to be troubled by the news, tweeting out a link to CNN’s story and writing: “What.”

CNN notes that the executive order was in its “early stages” and could still change.