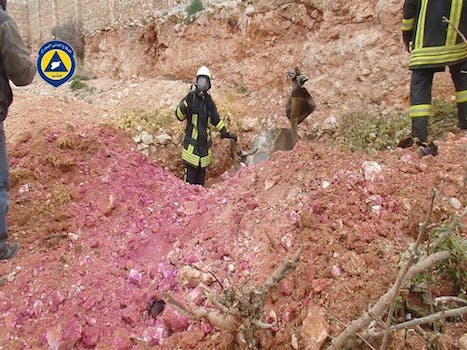 The details are still emerging.

Photos and first-hand accounts of what appears to be chemical warfare being waged in the Syria  are spreading on social media today.

The town of Hreitan recently suffered airstrikes from the regime of President Bashar Assad against rebels in the north of the country.

The Syrian Civil Defense, a group of non-violent volunteers who work to rescue victims of the war, have posted numerous pictures of soil discoloration and reports of “breathing difficulties” following strikes in the region.

The Syrian Civil Defense are investigating the exact nature of the attack.

The Syrian regime, which is said to hold one of the world’s largest stockpiles of chemical weapons, has used them to deadly effect for years in the civil war. Rebels have stolen hundreds of tons of such weapons and are said to have used them across the region, including in Iraq.

Under international pressure, the Syrian government agreed to destroy their chemical stockpiles by June 2014.

“[They] may have got rid of stockpiles but chemists [are] still active,” the Syrian Civil Defense asserted today on Twitter.

Photo via The White Helmets