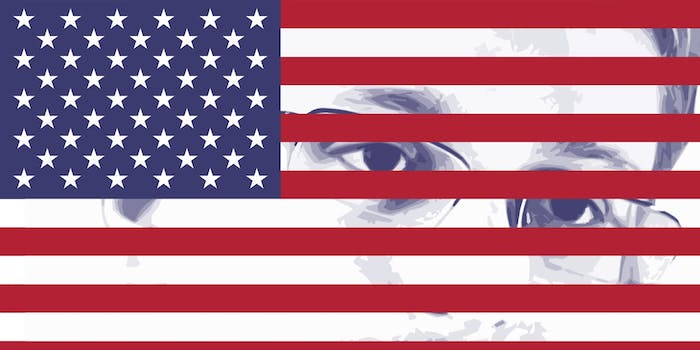 Looking at your sexts is apparently a "fringe benefit" for spies.

Exiled whistleblower Edward Snowden has given a rare interview to the Guardian, discussing—amongst other issues—a shocking culture at the National Security Agency (NSA) of sharing “sexually compromising” images of people.

During the interview, Snowden also opined on the challenges facing journalism today, and the difficulty for ageing legislators trying to understand technology, which he described as “probably the most important factor that explains failures of oversight.”

The 29-year-old former NSA contractor has been in an undisclosed location in Russia for almost a year, having fled the United States after leaking hundreds of thousands of top secret documents detailing state surveillance.

Since the initial revelations about the NSA’s PRISM program in June of last year, the Hawaiian has kept a relatively low profile, not getting directly involved with reporting, and he maintains that he kept no copies of the documents for himself. He has now given an unprecedented interview to the newspaper that led early reporting on the “Snowden Files,” being interviewed by editor Alan Rusbridger and journalist Ewan MacAskill.

Perhaps the most shocking revelation, Snowden asserted that there is a culture of sharing intimate and “sexually compromising” material harvested from unwitting surveilled citizens at the spy agency, and is considered one of the “fringe benefits of surveillance positions.” Describing a situation in which one intelligence operative shows such an image to another, and sends it round the office, Rusbridger pressed him on whether he’s seen this happen personally. “Absolutely,” Snowden responds.

“It’s routine enough … depending on the company you keep, it’s more or less frequent.” Nobody ever finds out about these invasions—which are almost certainly violations of official NSA policy—because the auditing process is “incredibly weak,” said Snowden.

“A 29-year-old walked out of the NSA with all of their private records. What does that say about their auditing?” Snowden joked.

An abridged portion of the interview uploaded to YouTube

Also discussed was the overall response to the revelations, with Snowden arguing that all those who have “an obligation to protect the privacy interests of their clients [are] facing a new and challenging world”—including “lawyers, doctors, investigators, accountants.” He singles out journalists as being put particularly at risk by the NSA’s surveillance programs. “The work of journalism has become immeasurably harder,” he says.

Snowden strongly refuted allegations that he is in the pay of the Russian government or has become an agent of the Kremlin, calling them “not credible.”

This is at odds with claims from an ex-KGB spy—who hasn’t been to Russia in over a decade—who alleges that Snowden meets FSB agents twice a week “over plenty of food and drink.”

Snowden also touched upon George Orwell’s 1984 (“an important book, but written a long time ago, and we shouldn’t bound ourselves to the limits of the author’s imagination”), Google (he doesn’t use it), and the problem of legislating technology. “Technical literacy in our society is a rare and precious resource,” and a lack of understanding goes a long way to explain the bloat of the surveillance state, Snowden claims.

It’s unclear when Snowden will ever set foot on American soil again—though U.S. Secretary of State John Kerry has offered to fly him home to stand trial. Snowden expressed doubts over whether he could possibly receive a fair trial, though he said he was “not going to presume” what his potential jurors should think. Nonetheless, the whistleblower remained stoic: “If I end up in chains in Guantanamo, I can live with that.”

The full interview will be published in the Guardian on Friday, July 18.