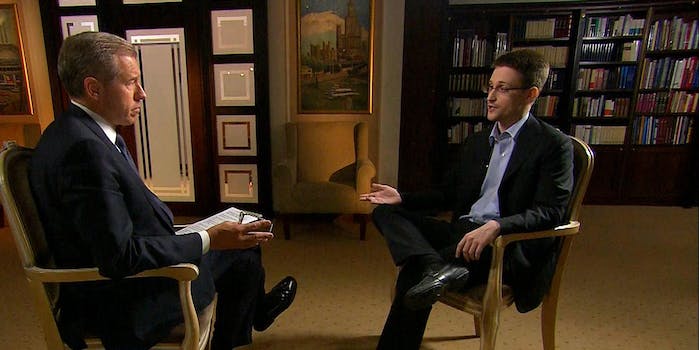 What do you mean 'low-level administrator?'

Tonight at 10pm EST, NBC Nightly News will broadcast the first American TV interview with Edward Snowden. But we already have a teaser.

“Inside The Mind of E. Snowden” is his most substantial appearance since the now-infamous Q&A with Glenn Greenwald and Laura Poitras for the Guardian, in which the then 29-year-old revealed himself to be one of the most significant whistleblowers in U.S. history.

Speaking with NBC’s veteran anchor Brian Williams, Snowden shoots back at the U.S. government for trying to discredit him as a former low-level administrator. When the leaks first came out, Rep. Mike Rogers (R-Mich.), chair of the House Intelligence Committee, said Snowden “clearly over-inflated his position,” and called him a “liar.” President Obama famously belittled Snowden as just a “29-year-old hacker.”

In the segment filmed over several hours last week in Moscow, Snowden claims that far from being a low-level lackey, he held many high-profile roles in the U.S. intelligence services, including the CIA. He even worked as a lecturer for the Defense Intelligence Agency, which the government has since confirmed.

When Williams asks Snowden if he was trained as a spy, Snowden says: “I was trained as a spy in the traditional sense, in that I lived and worked undercover overseas, pretending to work in a job that I’m not, and even being assigned a name that was not mine.”

Understandably, NBC is hyping the Snowden scoop, which is relatively rare for a political interview. Will Snowden take issue his inquisitor to task for labelling his actions “theft,” as the stone-faced Williams says in the intro, and for accusing him of “badly damaging your country?” We’ll just have to watch and see.