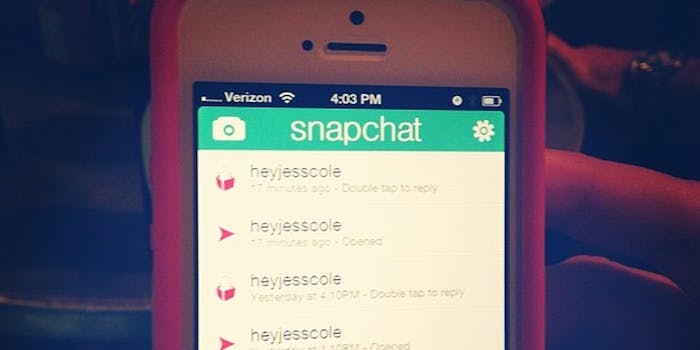 What was once a promise that your pictures would be deleted (and unrecoverable) is now pishposh.

Can everyone just agree that sexting through Snapchat is no longer—and perhaps never was— a safe messaging system? Every day it seems there’s a new way people you sent photos to through the app can save them without your knowing. What was once a promise that your pictures would be deleted (and unrecoverable) is now pishposh.

Saving Snapchats is even easier with a new free app called Snap Save—Snapchat’s iOS app arch nemesis. The app lets you keep photos and videos sent to you by Snapchatters.

“But you could just take a screenshot!” you say.

Yes, but Snapchat lets the sender know you’ve screenshotted them. Snap Save does not. So you could be Snapchatting with some untrustworthy individual who is lying about saving your sexts and you’d never know.

The only annoying downside for creepers is that you can’t have both apps open at once, so you’ll have to hop back and forth, opening Snapchats in Snap Save. But it might be worth it to keep those boobs in your iPhone forever.