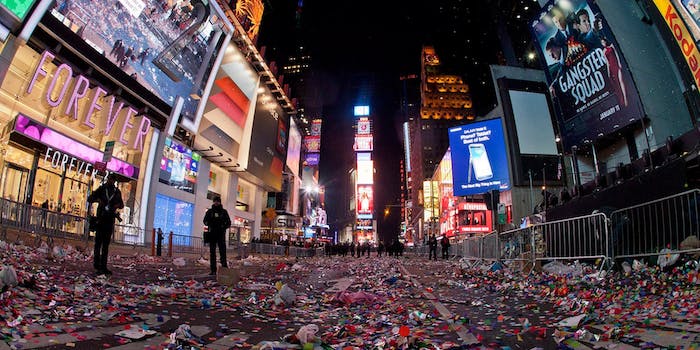 Photo by Anthony Quintano/Flickr (CC BY 2.0)

Your Snapchat photo could wind up in Times Square tonight

If you’re sharing celebration snaps from a New Year’s Eve event in one of a few major cities tonight, you might end up on a giant video screen in New York’s Time Square and in Snapchat users’ hands around the world.

The ephemeral messaging company will have a team of people hand-selecting some of the best photos and videos shared from Dubai, New York City, and St. Petersburg, Russia, as well as other cities around the world, the New York Times reports.

Selected snaps will wind up in an official Snapchat “story,” the feature that let’s you see something for 24 hours before it disappears. “Our Story,” which Snapchat rolled out this summer, lets people at different events share snaps to one timeline. According to the Times, tonight’s collaborative New Year’s Eve mashup is the biggest use of the feature yet, and the Snapchat team will be combing through hundreds of hours of photos and videos to show people what New Year’s Eve is like around the world.

Don’t worry if you’d rather not share your photo or video with more than just your friends—snaps will only be collected if users opt-in to sharing their moments with Snapchat employees, and since it’s curated, no raunchy photos or videos will wind up in Times Square.

Photo by Anthony Quintano/Flickr (CC BY 2.0)