Snapchat just started charging for lenses, and people are not happy

When Snapchat rolled out Lenses in September, barfing rainbows took over the Internet. But just as quickly as Snapchat introduced the filters for photos and videos in selfie mode, it made some disappear, replaced by less-popular Lenses.

Though cute, Snapchat’s Lenses were just as ephemeral as the snaps you send to friends. Now, Snapchat is letting you keep your favorites for just $0.99, the Verge first reported.

Called the Lens Store, Snapchat’s new money-making venture appears at the end of the row of Snapchat Lenses when you press and hold on your face in selfie mode. You can scroll through the handful of features that are cycled through on a regular basis, but if you stumble across one you just can’t give up, you can buy it to use whenever you like. 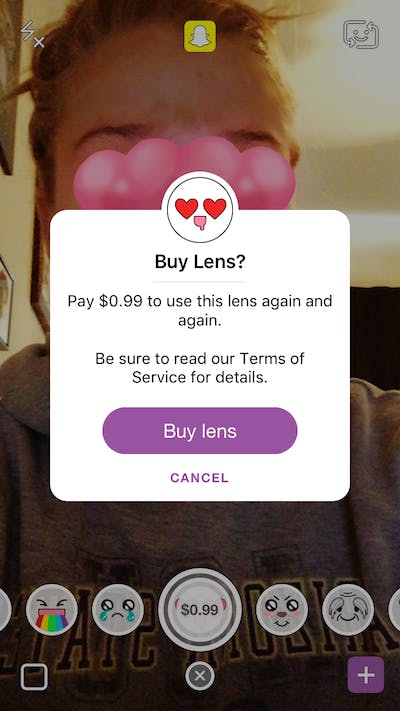 The Lens Store Snapchat’s latest attempt at driving revenue through in-app purchases. When Lenses first rolled out, so too did the ability to buy replays of your friends’ snaps, giving you more than the daily allowance.

Unsurprisingly, people are upset with the company’s move to get them to pay for a service they’re accustomed to using for free. But Snapchat is not concerned with the haters, in fact, it was retweeting a ton of people complaining about the new in-app purchases on Friday.

It didn’t take long for @Snapchat to start making you pay to use those filters. Thanks for ruining a fun idea

WHAT THE FUCK @Snapchat pic.twitter.com/OmBnOFItaQ

i love @Snapchat for so many reasons. i love them today for retweeted hate tweets about their new paid lenses. pic.twitter.com/2E0In2Oe06

whoever is running @snapchat's twtr rn is just like pic.twitter.com/3UYA7vcZyK

Also on Friday, Snapchat rolled out a subtle change to designate official accounts—now celebs and influencers on Snapchat can be found under “Official Stories” with an emoji by their username.