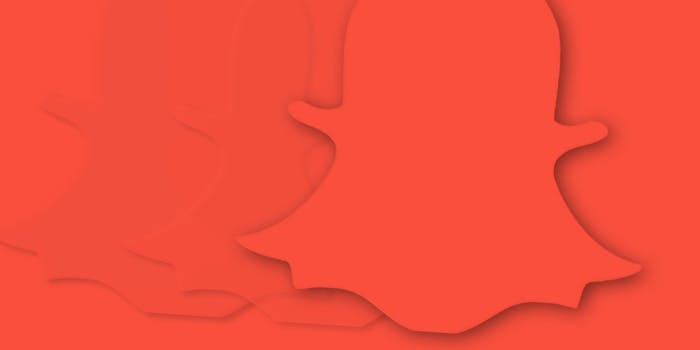 Snapchat is doing everything it can to kill screengrab apps

It isn’t uncommon for apps to spawn their own mini-economy of other apps built by third-party developers to add functionality or improve the existing app. For Snapchat, outsiders have never been welcome, just an ongoing inconvenience. Now the company is finally kicking everyone out and locking the gates behind them.

The core of Snapchat are its disappearing messages, a feature that has been undermined by third-party apps ever since the messaging service skyrocketed to the top of the download charts. In October 2014, a third-party app went from inconvenient to dangeous when Snapsaved was hacked. The breach exposed nearly 100,000 photos and videos that would have otherwise vanished.

According to a report from Backchannel, Snapchat has been working tirelessly on putting a stop to its unwanted hangers-on. The company announced that it has fortified its API (which was never publicly published by Snapchat but was described in detail by a a security publication) to keep third-parties out. The announcement comes after months of crackdowns and attempts to push the accessory apps off the platform.

For the developers of services to discreetly capture Snapshot screenshots—and for the makers of unofficial Snapchat apps for Windows devices—their tiny businesses have to close up shop.

Snapsaved.com now sports a disclaimer that it may not work. Reviews left on popular screenshot app SaveSnap have similar warnings. “A day after using this, Snapchat has warned me to stop using third-party apps such as this one, or my account will be locked. everyone beware of Snapchat for cracking down users use these apps at your own risk,” one reviewer wrote.

Google and Apple are also helping the company keep out apps that violate Snapchat’s terms of service. For those who decide to brave it, Snapchat will have a low tolerance policy: first issuing a warning, then locking an account if third-party app use persists. Workarounds are few and far between. Not even downgrading to an old version of the app will work; Snapchat now requires users have the current version of the app.

The hardline stance on third-party apps comes along with a new effort to beef up security and harbor trust in its privacy protections, an approach that the company hopes will flip the perception of Snapchat after receiving a failing grade from the Electronic Frontier Foundation’s annual “Who Has Your Back” guide.

Snapchat also just released its first ever transparency report, a practice many major tech companies take part in. The report reveals data requests made by the United States and international governments. Though there isn’t a ton to share (Snapchat received 375 requests from the U.S. government and 28 internationally since November 2014), the company intends to update the report biannually to increase transparency.

With more and more major corporations and advertisers participating in Snapchat, it’s clear why the company is making an effort to clean up its act. It’s already outgrown its reputation as a platform for sexting and has netted huge valuations. Now it’s doing everything it can to make sure that, unlike its messages, it never disappears.