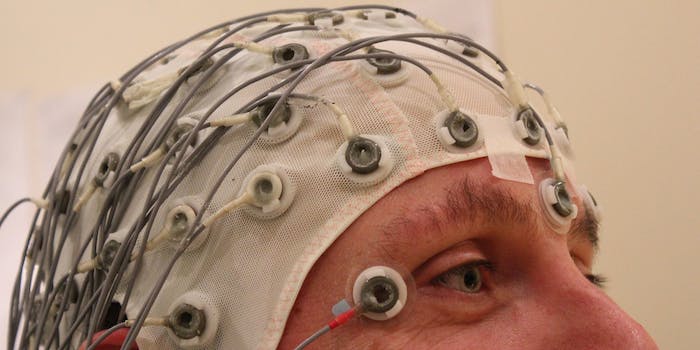 All those touchscreen taps are altering your brain activity

This is your brain on touchscreens.

If you’re a devoted smartphone owner, you probably tap your phone’s little screen dozens or maybe even hundreds of times per day. You might not think that your mindless finger movements could possibly have a significant effect on you, but according to a researcher in Zurich, you should think again.

As it turns out, your smartphone use may actually be altering your brain chemistry in significant ways.

By hooking volunteers up to a brain-scanning EEG machine and then comparing the readings to the past few days’ phone use, University of Zurich researcher Arko Ghosh has drawn a link between brain function and touchscreen tapping.

Using the battery logs to determine when each volunteer used their phone the most in previous days, Ghosh noticed a correlation between repetitive phone use and heightened activity in the parts of the brain that process touch from people’s thumbs and index fingers.

This suggested to Ghosh that, while you might think your brain stops worrying about your touchscreen taps as soon as you’re done updating your Facebook status or sending a tweet, your sensory processes remain in a much more active state for some time afterward.

It’s a remarkable example of what scientists refer to as neuroplasticity. The human brain, which was long thought of as an unchanging organ, actually evolves throughout a person’s life, changing the way it functions in subtle ways based on a person’s needs and environmental factors.

It follows, then, that if you’re glued to your phone for several hours every day, your brain is going to do its best to accommodate your habits—even if that means devoting a whole bunch of brainpower to processing meaningless taps.