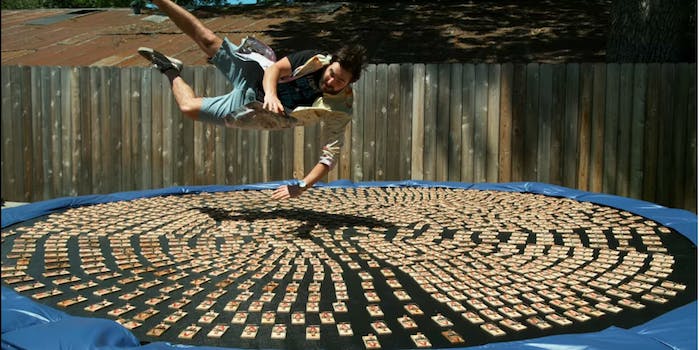 Watch in horror as dude jumps on a trampoline with 1,000 mouse traps

You never know what wild stunt will be the next viral sensation on YouTube. The latest gem comes from the popular channel the Slow Mo Guys, and boy do they deserve originality points. The two British hosts came up with the idea to jump on a trampoline covered in 1,000 mouse traps, and true to their name, record it in super slow motion.

The result is more gorgeous than anyone could ever have expected:

A chain reaction goes off the second co-host Dan Gruchy hits the surface of the trampoline, causing the mouse traps to cascade inward like dominoes. The slow-mo replay makes the dangerous stunt look like it was conducted in zero gravity.

The two YouTube stars say it took four hours to set up, a process that was delayed when a slight nudge caused hundreds of mouse traps to go off. Despite how dangerous it looks, Dan says the traps were not painful, “I just got little nips all over my body.”

We still advise you to leave this sort of stunt to the “experts.”