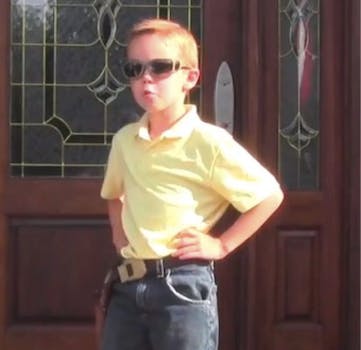 Little Isaac Anthony is not excited about universal health care, immigration reform, or gun control, and he's telling the world on YouTube.

Isaac Anthony is mad as hell about the idea of four more years with President Barack Obama, and he’s fixin’ to not be taking it anymore.

Anthony is the conservatively adorable, liberally mockable tiny tyke behind “6-Year-Old Gives 10 Reasons NOT to Vote for Obama!,” a snappy little video put together by Patriot Update, a publication that bills itself as “Free Press for the Conservative Revolution.”

Anthony’s parents lined him up in front of a barbed-wire fence so that he could deliver his doctrine to the masses:

The video’s been quite popular as far as visibility goes. Since posting onto YouTube on Sunday, “10 Reasons” has already racked up more than 105,000 views.

But not everybody has been supportive of little Anthony’s message—conservative Americans included. Over 1,250 people have disliked the video, while only 520 have cast their support.

“I’m a republican and I disapprove of this message,” YouTuber animalman38 wrote in the video’s comments. “Stop brainwashing and exploiting your kids and your personal political agenda. Let him be a kid and grow up to make his own decisions on politics.”

“I think it is exploitation of kids either way,” added todeck. “Its not cute or uplifting when adults from either party/ideology encourage or force children to do something they don’t fully understand.”

It’s true that Isaac Anthony might not “fully understand” what goes on around the White House and Capitol Hill, but based on the way he grabs his toy pistol at the :59 mark, you’d be safe betting on the fact that this kid is not psyched to have a president who believes in the virtues of gun control.