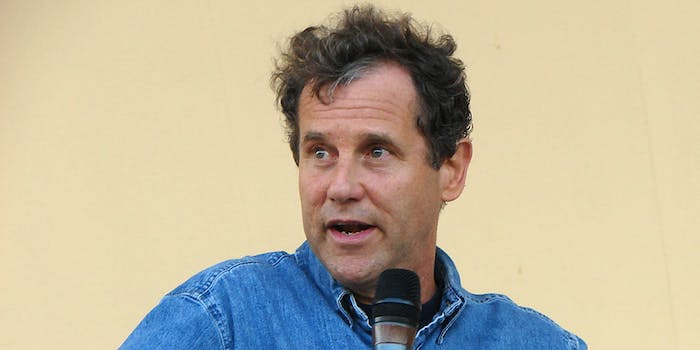 All signs point to yes.

In what’s expected to be a crowded 2020 presidential field, Sherrod Brown (D-Ohio) is suddenly emerging as a potential dark horse. Brown hasn’t had viral moments like other potential 2020 challengers—like Kamala Harris (D-Calif.), Cory Booker (D-N.J.), or Beto O’Rourke—but he appears to be the latest potential candidate everyone is talking about.

Despite his lower profile (or perhaps because of it) many believe the 66-year-old Senator could have the blueprint to a 2020 victory. In op-eds and on television, the “rumpled” Senator’s name is being thrown as the perfect foil for President Donald Trump: a midwestern liberal populist with a history of winning.

Who is Sherrod Brown?

With his 43 years in public office, Brown is no stranger to politics or Washington. Brown has held various positions in Ohio including state house representative, Secretary of State, and been a U.S. Representative for Ohio’s 13th Congressional District. Elected to the U.S. Senate in 2006, he serves as the Ranking Member of the Senate Committee on Banking, Housing and Urban Affairs. Brown was also vetted to be Hillary Clinton’s running mate in 2016 but told reporters he wasn’t interested in the job.

According to GovTrack.us, Brown is among the more liberal Democrats in the Senate.

He trails a few members including potential 2020 candidates Bernie Sanders (I-Vt.), Kirsten Gillibrand (D-N.Y.) and Elizabeth Warren (D-Mass). But throughout his political career, he’s championed and fought against discrimination for people of color, LGBTQ individuals, and women.

Brown voted against the Defense Of Marriage Act in the 1990s, voted for the National Voter Registration Act, co-sponsored the Lilly Ledbetter Equal Pay Act and has a 100 percent voting record from Planned Parenthood. Brown has long been a champion of workers rights and what he calls the “dignity of work.” He’s pro-union, a trade hardliner (he voted against NAFTA) and increased Wall Street regulation.

The blend of a progressive voting record and workers-first mantra from a midwestern senator has some people believing he could be an answer to marrying the younger, left-leaning voters in the Democratic party and voters in states like Ohio, Michigan, and Wisconsin that swung right and voted for Trump in 2016.

As Ohio turns redder, the former battleground swing state has become harder for Democrats to win—but not Brown. On this shift toward the right, Brown told Intelligencer “[Election Night] was pretty disappointing, because I don’t like the direction my state’s going. I mean…you see the demographics changing; you see my state getting more conservative, getting harder to win.”

After voting for Obama in 2008 and 2012, Ohio flipped nearly eight points to Trump in 2016. Despite this, Brown was elected to his third term in 2018—one of the only Democrats to win a statewide seat. Many have said that what happened this past November could be the writing on the wall for the next presidential election.

Prior to the election, Politico ran a profile on Ohio Democrats and how they were approaching these swing voters: would-be Democrats who have been poached by the GOP. Brown ran on a classic Democratic message, with a focus on the economy and blue-collar workers: against the Republican tax cuts, and for workers’ health care, retirement security and bargaining rights.

About his political playbook, they wrote: “Brown’s campaign strategy is mostly about bashing the industry-friendly Republican agenda without dwelling on the president who’s driving it.” Brown’s Senate campaign may provide some insight into how he’d run on a national state.

In what no doubt will be a fierce Democratic primary, Brown has a few political and personal obstacles to overcome. On healthcare, Brown has long supported single-payer or Medicare for All. However, when Bernie Sanders introduced his Medicare for All Bill in 2017, Brown did not co-sponsor the bill—and chose to support an incremental plan that would allow people to buy into Medicare at age 55 rather than 65.

In a conference call, Brown said “Republicans want to take away consumer protections – that is the fight for me…Medicare for All is a question for another day.” This slight deviation from an overwhelming popular position—nationally but not in Ohio—could hurt him during a heated primary.

In the era of #MeToo and Year of the Woman redux, there is also something in Brown’s past that threatens his 2020 chances. During his contentious divorce from his first wife, Larke Recchie, in the 1980s, Recchie accused Brown of domestic violence. In a signed affidavit, Recchie said she felt “intimidated” by Brown and feared for her and her children’s safety “due to the defendant’s physical violence and abusive nature.”

Over the years, however, Brown and Recchie have reconciled and she casts the claims as “angry words [during] an unfriendly ordeal.”

From filming campaign ads to hosting fundraisers, Recchie has supported all of Brown’s campaigns. During the last campaign cycle when these allegations were dredged up again, Recchie put out a statement with Brown’s office that read: “Anyone who suggests he is not an honorable man is just wrong. He’s a great father to our daughters Emily and Liz and he’s a wonderful grandfather to our grandchildren.”

Even though Brown 2020 has been floating around for a while, it seems he’s only recently begun thinking about a presidential run. Brown told Intelligencer that it wasn’t until he saw the response to Election Night 2018 that he considered running.

Shortly after Election Night 2018, Brown posted a blog titled “2020” to his website. He wrote: “Over the coming weeks and months, Connie [Schultz, his wife] and I will be discussing with family and friends whether I should run for president.”

Since then he’s become a more prominent presence on cable news, in newspapers, and on social media—suggesting he’s building a national platform ahead of the primaries. While Brown mulls over his potential presidential run, nearly all media outlets have run stories equivalent to the “he’s running” meme.

In the last few months, profiles of Brown have popped up on the New York Times, the New Yorker, Newsweek and Politico. Whether it’s his locally-made suits, aversion to the terms flyover country and Rust Belt, or his canary pin, Brown feels like the perfect person to win over those coveted Obama-Trump Voters. Whether he ultimately decides to throw his hat into the 2020 ring, Brown may be able to give the Democrats what they so desperately need: a person shaping a path forward.