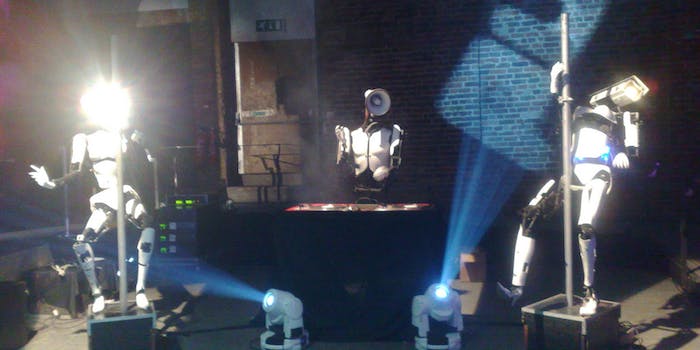 The future has arrived in the form of pole-dancing robots

For the man who prefers the feeling of cold steel against his flesh.

Are you a tech enthusiast who grew up thinking Rosie was the hottest character on The Jetsons? Do you love getting lap dances, but wish the woman on your lap smelled like diesel oil and iron instead of baby powder?

Then head on down to the international CeBIT expo in Hanover, Germany, where a pair of voluptuous, life-sized, pole-dancing robots recently made their debut.

Designed by British artist Giles Walker, the robot dancers officially debuted at the European tech conference in 2012. They were so popular that they returned for this year’s tech conference, which British prime minister David Cameron and chancellor Angela Merkel officially opened Sunday night.

Despite their novel function and fairly lifelike movements, the robots don’t actually seem that technologically sophisticated. The droids are made of old car parts, with heads constructed out of surveillance cameras, and their gyrations are controlled via computer, as a robot DJ spins some beats in the background. No word on whether they also have the ability to pick up dollar bills with their butts, or if they can say “I’m just doing this so I can stay in school and finish my nursing degree” in binary.