Wanna pull an Anthony Weiner and sext a total stranger, except without that whole pesky compromising your marriage/reputation/political aspirations part? Try the Sext Exchange, a new project that lets you send and receive anonymous sexts to strangers via Twitter, and manages to be weird, sexy, and actually kinda touching, all at the same time.

Created by developer Brendan Adkins and inspired by a tweet format by poet Patricia Lockwood, the Sext Exchange lets you send creative sexts (“preferably funny, sexy, thoughtful, silly, or all of the above,” according to the website) to total strangers on the Internet via a bot. There’s also a gamification aspect to the project: You get points if your sexts are upvoted by other sexters. The result is a bit like an old-school arcade game meets the anonymous sharing app Whisper, if  the secrets on Whisper were less about middle school crushes and more about wanting to screw someone doggy-style in the middle of an enchanted forest. 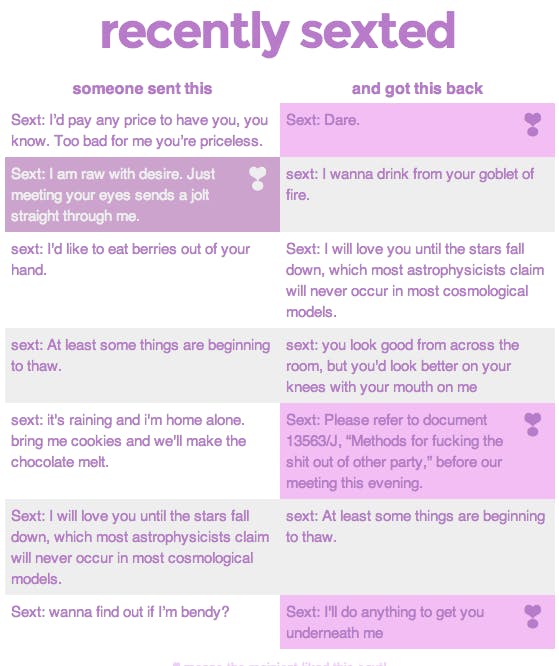 If you’re anything like me, you probably assume that an app that lets you sext a total stranger is basically an open invitation for all trolls to come out from under their bridges and start sending the sickest, most twisted shit they can think of.

But as xoJane writer Kate Conway found out, this isn’t the case: of the 2,000 sexts that have been sent via Sext Exchange so far, only five have been flagged for inappropriate content. In fact, the vast majority of the content on Sext Exchange is surprisingly tame, and even sort of poignant. “Each sext I send means extending my hand briefly into the digital abyss just to feel a fleeting brush of someone’s anonymous fingers against my own,” she wrote.

With this in mind, I decided to plunge into the abyss to see whose fingers I could brush up against. This sounds a lot dirtier than it actually was.

Basically, here’s how it works: you follow @sextexchange on Twitter, and then you wait for a follow back. Once you receive the notification, you DM @sextexchange with your naughtiest sex fantasy or most intimate romantic thought, starting with the word “sext:”.

Because I’m not particularly sexually imaginative (no joke, I literally found out two weeks ago that non-porn stars could actually have sex standing up), I decided to go with the latter by sexting a description of the most romantic, intimate act I could think of:

A few minutes later, I received an anonymous sext from another user. I immediately felt guilty, because he clearly took the aims of the Sext Exchange a lot more seriously than I did:

My heart started beating super-fast. Even though I knew the anonymous sender wouldn’t be receiving my reply, I felt an obligation to respond in kind with another office sex-related fantasy—which was difficult, because my office doesn’t actually have a copier. Nonetheless, I tried to keep up the best I could:

A minute later, I received my anonymous sex bot’s response:

I quickly started to grow tired of sending a message into the void, only to have an unrelated reply spat back at me seconds later. I started to feel like my anonymous sex bot was like the worst kind of lover: smarmy, self-involved, and unattuned to my needs. And the only fingers I felt brushing up against me in the abyss were my own fry grease-covered ones. I decided to put an end to our brief sexting rendezvous, as quickly and gently as I knew how: