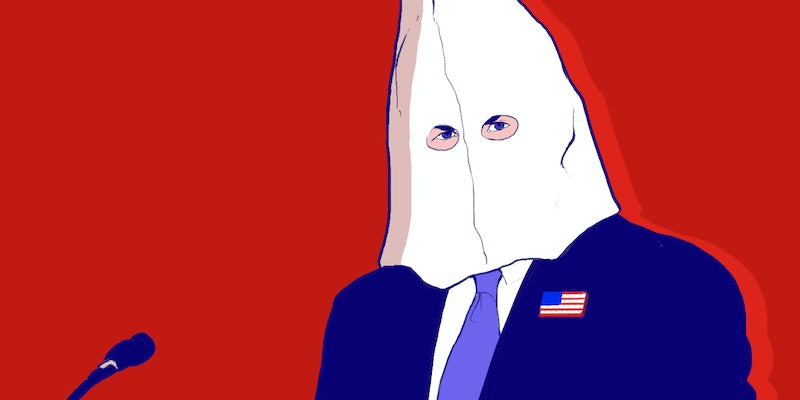 Is anybody accused by 'Anonymous' of being in the KKK actually a member?

A number of U.S. senators and mayors have strongly denied having any involvement with the Ku Klux Klan, an accusation circulated widely on the Internet and misattributed to the hacker designation Anonymous.

Four senators and five mayors were accused of being “associated with either kkk or racist related” in a document that was posted Saturday to the text site Pastebin, a common repository for hackers to dump information anonymously. The political doxing—the releasing of someone’s personal information—isn’t directly associated with Anonymous, though it’s easy to think so: The accusation follows a string of other notable releases on Pastebin by some people identifying as Anonymous that that claim to out other KKK members.

What is clear, however, is that despite stories on the claims on sites like AL.com, Daily Kos, and the IB Times, the four senators and five mayors named staunchly deny being part of the KKK. The Twitter account of the user behind the claims, @sgtbilko420, didn’t respond to the Daily Dot’s request for his evidence, and he didn’t provide any on his account, though he claimed that he would send evidence to several news outlets.

“It’s 100% false,” a representative for Senator Thom Tillis (R-NC) told the Daily Dot about the claims.

Senator Dan Coats (R-Ind.) was proactive, tweeting from his official account they were “baseless Internet garbage.”

This is baseless Internet garbage of the worst kind

Madeline Rogero, mayor of Knoxville, Tennessee, responded with a lengthy Facebook post touting her long history of fighting for civil rights; she also pointed out that she has an interracial family. “I don’t think the KKK would want anything to do with me,” she wrote.

The Pastebin text also cites Lexington, Kentucky Mayor Jim Gray, citing that he has “no known wife/spouse.” Gray is openly gay, and the KKK staunchly refuses to admit gay members.

I am opposed to everything the KKK stands for. I have no idea where this information came from, but wherever it came from, it is wrong.

In what appears to be a completely separate operation, members of Anonymous have been releasing screeds to Pastebin purporting to show the names and information of other KKK members, some of them police officers. But little, if any, of that information appears to be both new and accurate. Much of it had been included on similar documents published in previous years. Of the 20 listed phone numbers listed that the Daily Dot called, most rang unanswered. A handful were busy, one person immediately hung up, and one reached a law office, whose receptionist admitted confusion that he’d been receiving strange calls.

If the information is incorrect, this wouldn’t be the first time: There’s a long history of self-proclaimed members of Anonymous accusing the wrong people of crimes and ugly deeds.

That said, there is an Anonymous announcement that as part of what it’s calling Operation Hoods Off, members will freshly dox 1,000 members of the KKK on Thursday, Nov. 5. That’s a special day for Anonymous, as it’s the anniversary of the date that Guy Fawkes, the original inspiration of Anonymous’s iconic masks, tried to blow up England’s House of Lords.

Anonymous, commonly associated with hacktivists with a sense of social justice, has a long history of clashing with the KKK. Last year, the two parties sparred on social media during the riots in Ferguson, Missouri. Anonymous took over the KKK’s @KuKluxKlanUSA Twitter account, which remains compromised a year later.

Even if none of Anonymous’s targets are members of the KKK, nor any of the politicians @sgtbilko420 named, at least one American political figure has been embarassed for an association. Theresa Sharp, mayor of Lahoma, Oklahoma, has apologized for her husband’s decision to dress up as a KKK member for Halloween.