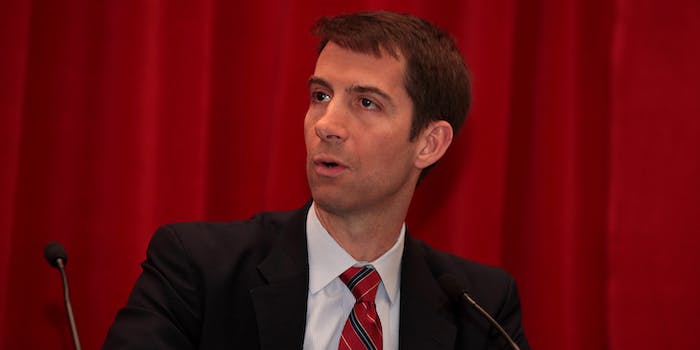 Iran: It’s one of the Republican Party’s favorite boogeymen, second only to President Barack Obama. But on Sunday, Iran got the better of Sen. Tom Cotton (R-Ark.), who flubbed a line about the looming specter of the Islamic country while discussing its spread across the region.

Cotton was trying to explain to CBS’ Bob Schieffer why he and 46 other Republican senators had sent a letter to Iran warning it not to make a deal over its nuclear program with the Obama administration.

“We have to stand up to Iran’s attempts to drive for regional dominance,” Cotton said on CBS’ Face the Nation.

So far so good, right? Standard conservative rhetoric about standing tall and looking tough. But here’s where things get tricky. Cotton, a first-term senator who by all indications does not know much about foreign policy, decided to elaborate on how Iran was asserting its regional dominance.

“They already control Tehran and, increasingly, they control Damascus and Beirut and Baghdad. And now, Sana’a as well.”

But what did Cotton lead with? Tehran. “They already control Tehran,” he said.

It would be deeply disturbing if the Iranian government didn’t already control Tehran, given that this city of 8.3 million people is the capital of Iran.

The most frightening part of Cotton’s gaffe is that his brand of foreign-policy ignorance could spread across the Western world. Imagine if the U.S. Congress tried to tell other national legislatures how to negotiate with Iran.

We must control the spread of congressional extremism. Congress already controls Washington.