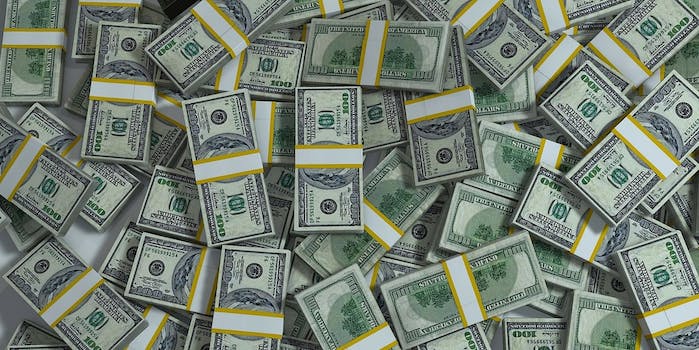 Why’d the Senate pass a bill fast-tracking the TPP? Follow the money.

There's a lot more dough behind the TPP than there is against it.

On Wednesday, the United States Senate passed a bill giving President Barack Obama fast-track authority for the approval of treaties, such as the controversial Trans-Pacific Partnership (TPP).

The legislation, known as Trade Promotion Authority (TPA), would restrict lawmakers’ ability to block or makes changes to trade deals—both Congressional filibusters and amendments to trade deals would be prohibited—meaning lawmakers voted to give themselves less power.

The bill’s passage through the Senate was a big win for the White House’s trade agenda—not just Obama’s—because it gives the the president fast-track authority through 2018. During that time, the Obama administration hopes to enact the TPP, a controversial trade deal involving a dozen countries on the shores of the Pacific Ocean, including the U.S., Japan, Vietnam, and Peru.

Corporate, nonprofit, and industry groups supporting the TPA have made $218 million in campaign donations to current members of the Senate.

There are a lot of factors contributing to why the bill passed: the bully pulpit of the presidency, the rare alignment of interests between the White House and mainstream Republican leaders in Congress, as well as legislative maneuvering involving another bill designed to give monetary assistance to American workers who will likely be displaced as future trade agreements send some jobs overseas. However, there’s one strong force behind TPA that’s difficult to ignore: all of the money backing it.

An analysis conducted by government transparency watchdog Maplight found that industries and groups supporting the bill gave nine times as much money to members of the Senate as those opposing the bill. In the period between October 2008 and last September, corporate, nonprofit, and industry groups supporting the TPA have made more than $218 million in campaign donations to current members of the Senate, while those opposed have only given $23 million

The list of industries supporting fast track is long and includes everything from Wall Street and pharmaceutical firms to tobacco and oil companies. On the other side are nonprofit groups supporting women’s issues and environmental policy as well as unions representing manufacturing, transportation and service workers.

In compiling this data, Maplight’s researchers scoured the Internet for primary-source documentation of various organizations’ stated positions on the legislation. Information, which had to explicitly reference Trade Promotion Authority, could come from policy papers issued by think tanks and industry organization, press releases, and congressional testimony.

For example, researchers found a statement in favor of fast-track authority from the U.S. Business Coalition For The Trans-Pacific Partnership and then linked the individual member organizations to their respective industries.

The passage of TPA doesn’t necessarily mean the Trans-Pacific Partnership is a sure thing. The trade deal, which is nearing the end of a 5-year-long negotiation process through the Executive Branch, still needs the consent of Congress. But, without the ability to filibuster the bill enacting the deal or even to put forward amendments, the TPP’s congressional critics will have a much more difficult time having their voices heard.

A recent Pew study found a plurality of Americans approve of the Trans-Pacific Partnership. The survey found 49 percent of respondents said the trade deal would be a good thing for the country, while 29 percent said the effect would be negative. The U.S. public’s support for the agreement is markedly lower than most other countries participating in the talks. Support for the agreement was above 50 percent in Vietnam, Peru, Chile, Mexico, Japan, Australia, and Canada.