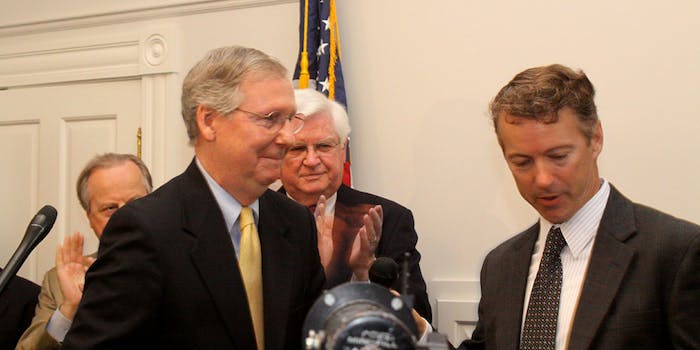 Insurance companies wouldn't be forced to cover essential health benefits under the plan.

Senate Republicans have inserted a provision into their latest healthcare plan that exempts members of Congress and their staffs from no longer receiving essential health benefits, according to a recent report.

A Senate Republican aide confirmed the exemption to Vox on Thursday. The website reports that the House’s version of the bill also contained the exemption, but was later taken out.

The Senate’s bill exempts the health insurance plans that cover Members of Congress and their families from a provision that allows insurance providers to offer plans that exclude coverage of essential health benefits, Vox reports.

Critics of the Republican provision allowing the sale of insurance plans that fall below ACA coverage requirements say it could divide the market into affordable plans healthy people can purchase while sick people will be forced to pay higher premiums for plans with essential health benefits covered.

While the provision exempting Congress for a part of the new healthcare bill, unveiled on Thursday, is included in the bill, experts are not yet clear on how it would affect their coverage due to the tangled nature of the healthcare law.

The reason for the exemption, according to Vox, is that it was necessary to include for the bill to be budget-neutral, which allows Senate Republicans to pass the legislation with a simple majority through a process called budget reconciliation. Republicans currently hold 52 seats in the Senate, while Democrats—all of whom oppose the legislation—have 46 seats, as well as two independents who often vote along Democratic lines.

Without making the bill budget neutral, Republicans would be forced to win over some Democrats to pass the 60-vote threshold need to close debate on a bill of that nature.

Changes to the Senate healthcare bill, dubbed the Better Care Reconciliation Act (BCRA), include boosting funds to help curb America’s opioid epidemic but also retained one of the more debate portions of the bill – continued slashing of funds dedicated to Medicaid.

In the new version, funds dedicated toward combating the opioid crisis will jump from $2 billion to $45 billion, and it keeps some taxes for wealthier Americans—including a 3.8 percent tax on investment income for those who make more than $200,000 and a 0.9 percent surtax on Medicaid.

The Congressional Budget Office, a non-partisan group, found that the original version of the BCRA would leave approximately 22 million fewer Americans with insurance in the next decade, similar to what it predicted under the House’s version of the bill. The most recent version has not yet received its CBO score.