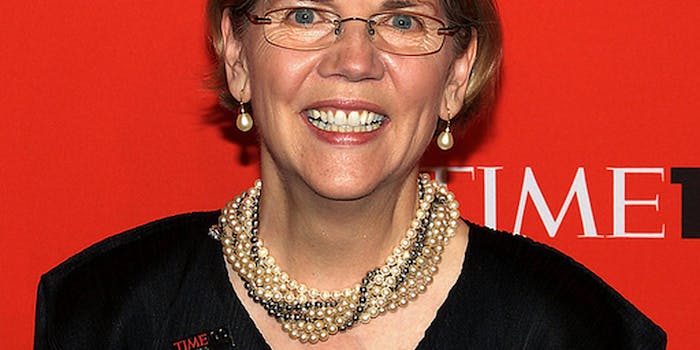 If upvotes won elections, the Massachusetts Senate hopeful would be in the Capitol already.

As part of her campaign for a Massachusetts Senate seat, Warren spoke last weekend about the rich giving back to future generations because “there is nobody in this country who got rich on his own,” she said.

The YouTube video of her speech has been viewed more than 112,000 times and has collected about 1,000 comments.

“Now look, you built a factory and it turned into something terrific, or a great idea? God bless. Keep a big hunk of it,” Warren said according to the video. “But part of the underlying social contract is you take a hunk of that and pay forward for the next kid who comes along.”

Warren has been a top Twitter trending topic for the last 13 hours. She has been mentioned more than 20,000 times, according to statistics from Topsy, a social media search engine.

Tim O’Reilly, founder and CEO of conference organizer and book publisher O’Reilly Media, was smitten over her comments.

“Wow, Elizabeth Warren just got my support in her Senate race” he tweeted. “Big time common sense and straight talk!”

On Reddit, Warren was the topic of two front page posts where people said she could become the first female president.

Other redditors, like remarkedvial, praised Warren for her fiscal prowess but were disappointed in how oblivious many Americans can be when it comes to simple economic concepts.

Warren is an attorney and law professor at Harvard University. She was named one of Time’s 100 Most Influential People in the World in 2009 and 2010.