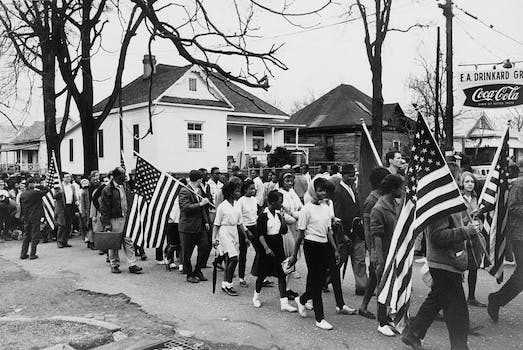 'If Selma taught us anything, it’s that our work is never done.'

Thousands of people in Selma, Ala., and Madison, Wis., have taken to the streets today to commemorate the 50th anniversary of the civil rights marches and protest the death of a 19-year-old man by police, respectively.

President Barack Obama traveled to Selma to “speak about the future of civil rights in America on the Edmund Pettus Bridge, the site of a violent confrontation between police and peaceful protesters that became known as ‘Bloody Sunday,’” PBS reported.

The Twitter hashtag #Selma50 has been trending off and on today, thanks to 53,000 mentions over the past 24 hours.

Obama to speak today at #Selma50 commemoration. See our snapshot of public opinion on civil rights in the mid-60s http://t.co/F1IcnxcyQc

They came toward us beating us with nightsticks, bullwhips, trampling us with horses, releasing the teargas. #Selma50 pic.twitter.com/s9Ey2ZavZA

“If Selma taught us anything, it’s that our work is never done,” Obama said in his speech. “This country’s racial history stills casts its long shadow upon us.”

Nearly 900 miles from Selma in Madison, the community has been protesting the killing of Anthony Robinson. The 19-year-old was shot five times by a police officer Friday at around 6:30pm, NBC reported.

“Once inside the home, the subject involved in this incident, the same one that had been allegedly out in traffic and had battered someone, the same subject then assaulted my officer and in the context of mutual combat in that sense the officer did draw his revolver and subsequently shot the subject,” Koval said.

The protests in Madison are being broadcast online live via Ustream.

One of the chants being used in Madison by protesters is “No justice, no peace,” which was also used during the protests in Ferguson, Mo., over the death of teenager Michael Brown by police.

Brown’s mother was seen in Selma today as part of the 50-year commemoration.

From Ferguson to Selma: Michael Brown's mother at #Selma50 pic.twitter.com/ZvxKEiB6Ig

The full transcript of the speech can be found here.

Photo via Library of Congress/Public domain