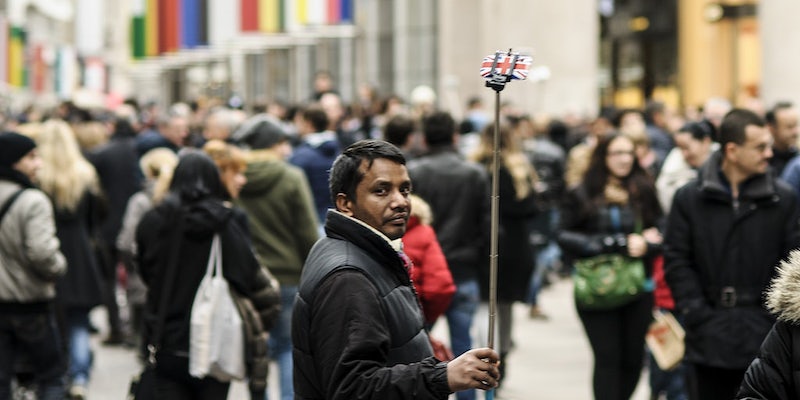 Dads with selfie sticks are the gift that keeps on giving

The selfie stick is the most “dad” gift ever.

In the history of holiday giving, there is no gift more quintessentially “dad” than the selfie stick. What else would you get for the man who tells dirty jokes about penguins, comes up with those lame jokes about celebrities that make you roll your eyes, and sends you emails reminiscing about pudding?

This year, dads everywhere got their hands on some selfie sticks, and the photos that wound up on Twitter could only be described as “peak dad.”

Some people consider the selfie stick a tool for capturing and distributing our vanity. Some call it a sign of humanity’s downfall. Many people on Twitter have deemed it the “narcissistick.” The selfie stick isn’t necessarily a new idea, but it’s only recently companies have figured out how to capitalize on our desire to take photos from the front. Origins of the selfie stick go as far back as 1926.

If you scroll through all the dad photos on social media, it’s clear they’re not using their elongated gifts because of some narcissistic drive to see what they look like and share photos across the Internet. Rather, their new devices are simply companions to their goofy behavior which can now be documented from a few feet away. They torment wives and take toilet selfies—it’s almost as if selfie sticks were made just for dads.

@selenalarson I got my dad one for Hanukkah. He fucking loves it pic.twitter.com/tXQbCgPLVQ

Dad got a selfie stick for christmas… pic.twitter.com/V13h7c1WpI

My dad got a selfie stick….. pic.twitter.com/yAVWRE3ltb

My dad wanted to take a selfie on the train and broke out the selfie stick pic.twitter.com/ijliTeRRkm

I'm currently watching my dad use a selfie stick

Is this even real life pic.twitter.com/iIcNHbENAR

my dad made a selfie stick out of an umbrella handle tru pic.twitter.com/n0aK8WOVXM

Yo. Dad got us a selfie Stick. We one of THOSE people now. pic.twitter.com/vE8xEWO77p

Or dads of dads.

The next time someone criticizes the selfie stick, ask them why it’s so egotistical. The aluminum rod is all about self-expression and quirkiness. And an excuse to take a photo of yourself on the toilet.