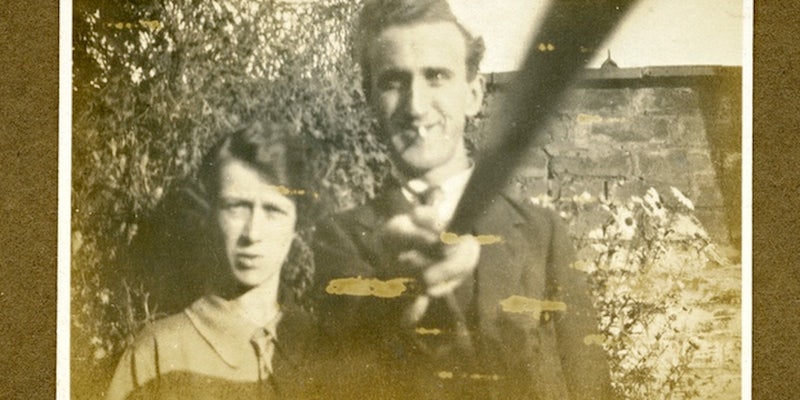 The Jazz Age origins of the ‘selfie stick’

The selfie stick, a sign of Western decay, is much older than we thought.

They say that those who forget the past are doomed to repeat it. A recent find in a photo album proves that we forgot a crucial part of the technological past, and, as the expression suggests, we’re paying for it with our dignity today.

Alan Cleaver, a resident of Whitehaven in North West England, was rifling through an album of his family’s old photographs when he discovered a peculiar photo of his grandparents, Arnold and Helen Hogg. In the picture, taken in 1926, Mr. Hogg is holding a pole to which he has attached his camera. That’s right: Arnold Hogg is the first person in recorded history to make use of what we now call a selfie stick.

Alan Cleaver told the Guardian that he couldn’t remember his grandparents ever using the stick, but he said that the self-sufficient contraption fit the mold of his creative grandfather, who died in 1972 when Cleaver was a teenager.

“This photo has always been a family favourite,” Cleaver said. “Arnold Hogg, my grandad was a very funny guy and it just seemed to sum up his humour.”

Hogg may very well be the inventor of the proto–selfie stick, but the device he apparently pioneered long before front-facing smartphone cameras (or phones, for that matter) is a highly controversial one. The New York Post called the selfie stick “2014’s most controversial gift,” Time said it was “killing the selfie,” and Gizmodo put it on a list of products that deserved to be banned.

“There are so many different kinds of selfie sticks,” wrote Gizmodo’s Kate Knibbs, “yet no one has managed to invent one that doesn’t automatically make the person holding it look like a huge dork.”

South Korea took Gizmodo’s advice in November. The government banned the devices because it was worried that their short-range Bluetooth transmitters (used to trigger a smartphone’s shutter button) could interfere with other wireless devices.

Governments and tech blogs can rant about selfie sticks all they want, but teens love them, and they’re flying off of online shelves. According to the Guardian, Amazon sales of selfie sticks rose than 300 percent between September and November compared to the period between June and August.

What does Cleaver think of the device his grandfather wielded with a wry smile in 1926? He thinks it’s emblematic of societal anomie.

“I’m horrified at the selfie stick,” he said.

Photo via Jonathan Chie/Flickr (CC BY 2.0)