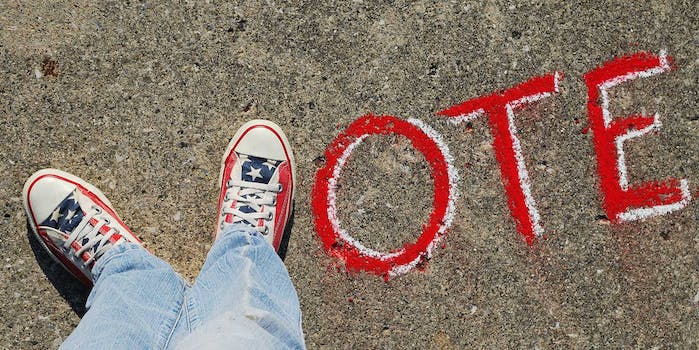 Sean Parker wants to make a Facebook for political discussion

Because, you know, talking about politics online usually goes so well.

Largely thanks to his involvement with Facebook, Parker is now a billionaire.

Earlier this week, Brigade announced that it had acquired two political social networking tools—Causes and Votizen. Causes is an online campaigning app that allows NGOs and political groups to solicit donations, collect signatures, and raise awareness for various projects. Votizen is a platform designed to educate voters about various issues. Both Causes and Votizen, which were owned by a larger company that Brigade just bought a majority position in, will be incorporated into Brigade’s infrastructure.

?Overcoming 50 years of declining participation in democracy and feelings of powerlessness, disconnectedness, and disenfranchisement by big interest groups and big money takes time, energy, and resources,” wrote a Brigade spokesperson in a blog post.

What Brigade will actually look like remains a mystery, as public registration to the site is still closed. Sources close to the company allegedly told TechCrunch the network plans on launching in early 2015.

Parker has personally given millions of dollars to political candidates over the years. Most of this money has flowed to Democrats, although he donated just over $10,000 to Senator Marco Rubio last year when the Florida Republican was working on pushing through a compromise immigration reform bill.

While a study released earlier this year found that people with larger numbers of Facebook friends were less likely to talk politics on the social network despite their outsized ability broadcast their views, the goal of Parker’s new venture is to encourage people to connect with others online to engage politically.

The creation of a social network exclusively for politics is part of a larger trend within the community of social networking firms to create a litany of different specialized sites, each targeted toward a specific use case, rather than a single site that aims to do everything. People can go to Instagram to share photos, LinkedIn for job leads, and (possibly) Brigade to talk politics.

A recent study found that 23 percent of adult American Internet users, some 57 million people, are active on seven or more social networks.

Parker—who served as the founding president of Facebook, was cofounder of the pioneering music-sharing platform Napster, and sits on the board of directors of music streaming service  Spotify—will serve as the company’s chairman. Brigade’s CEO is Matt Mahan, whose bio says he was first ever political candidate to leverage the power of Facebook, while running for Harvard student body president in 2004.

The site’s two major investors are Salesforce CEO and noted philanthropist Marc Benioff and Silicon Valley angel investor Ron Conway. Brigade isn’t Conway first dive into politics. In recent years, Conway has become one of this most high-profile, unelected figures in Bay Area politics due to his status as one of the primary benefactors of San Francisco’s extremely tech-friendly mayor Ed Lee.

Joe Green, president of the political advocacy group Fwd.us, told USA Today that he had attempted to convince his college roommate Mark Zuckerberg to create a social network for politics. Instead, Zuckerberg created Facebook. Green, who was introduced to Parker by Zuckerberg, sits on Brigade’s board.

Photo by Theresa Thompson/Flickr (CC BY 2.0)