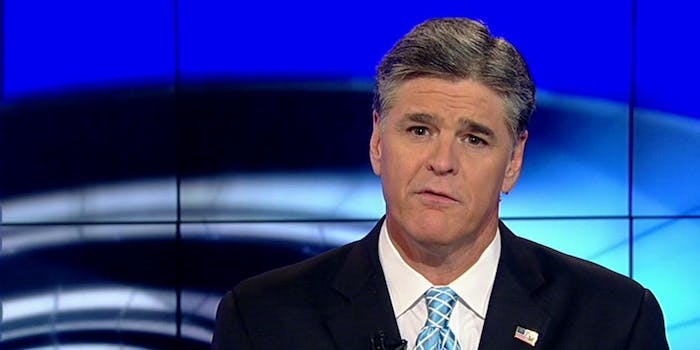 Privacy-packed Blackphone gets a ringing endorsement from Sean Hannity

Fox News anchor Sean Hannity wants you to know that there’s an easy way to avoid that nosy government getting all up in your smartphone business. This afternoon, the conservative TV host tweeted an endorsement of Blackphone, a privacy-centric smartphone from Silent Circle.

I’ve been telling you about Silent Circle’s privacy apps- Blackphone is their first device! http://t.co/D9t9IsJWMq #ad

Blackphone is THE 21st century smartphone to keep your mobile calls and texts private and secure! Get yours now! http://t.co/D9t9IsJWMq #ad

Silent Circle’s privacy-centric calling app and its new phone are designed for people and organizations that value security and anonymity. Similar devices and services are popular with LGBT activists in countries that are extremely unfriendly to gays and lesbians, including Uganda. It’s not lost on advocates that Hannity, whose conservative views are no secret, is now promoting a device that is part of the ecosystem that allows gay-rights activists to thrive in dangerous countries.

Hannity took his support of Silent Circle to the national airwaves on July 31, when he interviewed the company’s CEO, Mike Janke, about what he called the “NSA proof ‘black’ phone.”

According to Vic Hayder, Silent Circle’s chief of revenue, Hannity is currently using the phone as he covers the Black Hat cybersecurity conference, which is taking place in Las Vegas this week.

The Blackphone, which runs a custom version of Android called PrivatOS, costs $629 (no carrier offers it on-contract). Ars Technica called its performance “mediocre,” but praised its fine-grained app permissions and privacy-minded communications and networking features. The New York Times said it “is definitely more secure than your average phone, but comes with trade-offs that most consumers might not need or enjoy.”