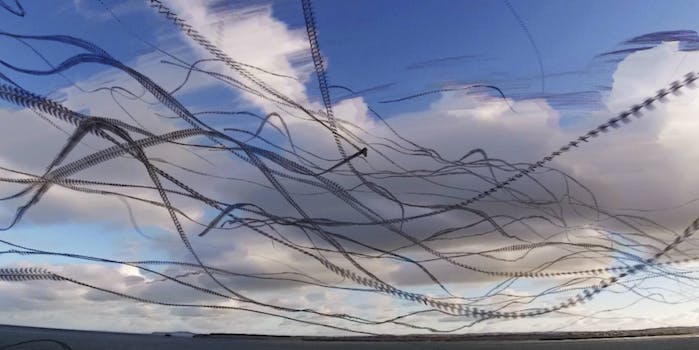 It’s not everyday that a video of seagulls leaves you mesmerized, but that’s just what Parker Paul’s Seagull Skytrails manages to accomplish with some gorgeous scenery and a bit of clever video editing.

Every winding trail you see in the video is a single seagull enjoying a pleasant day on the coast. Paul used the Echo feature of the Adobe video editing program called After Effects to repeatedly duplicate each bird’s movements, creating the hypnotic effect of hundreds of birds flying along predetermined paths in the sky.

Later in the video, the effect is tweaked to repeat more rapidly, painting long, blurry paths of wings in the sky and showing how each bird zooms in and around each other. It’s an extremely creative use of a very popular editing tool, but mostly, it’s just a really hypnotizing video.