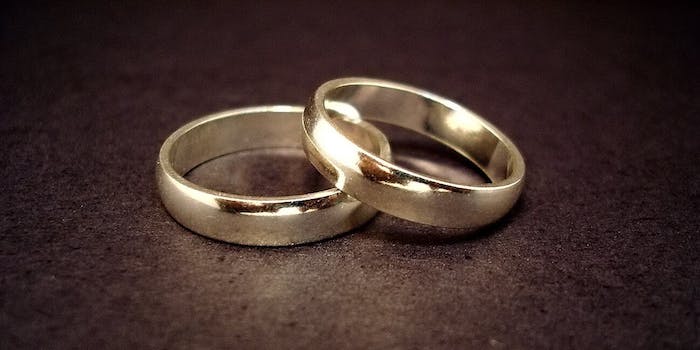 'I would just challenge members of my party to look at the faces at the right hand of your screen.'

On Friday, the U.S. Supreme Court issued a ruling legalizing same-sex marriage in all 50 states. While there are a lot of people are who were really, really excited about this historic expansion of marriage rights, others were considerably less so.

The gaggle of conservatives running for the 2016 Republican nomination for president, for example, were not particularly happy with the ruling. Former Arkansas Gov. Mike Huckabee called it a “flawed, failed decision” that is an “out-of-control act of unconstitutional judicial tyranny.” Former Florida Gov. Jeb Bush bluntly stated that “I believe in traditional marriage,” and Louisiana Gov. Bobby Jindal insisted, “this decision will pave the way for an all-out assault against the religious freedom rights of Christians who disagree with this decision.”

Speaking on CNN shortly after the court’s decision was handed down, conservative commentator S.E. Cupp gave an emotional plea to her fellow Republicans to recognize the fundamental humanity of LGBT people wanting to get married. Cupp, the author of Losing Our Religion: The Liberal Media’s Attack on Christianity, not only made the moral case for supporting same-sex marriage, but charged that embracing the LGBT community’s crusade for equal rights was a essential for the long-term survival of the party.

Frankly, it’s hard to watch that and not get emotional. Those people there are not pariahs. They are patriots. Wherever you stand on the politics of this issue, and I’ve long been in support of gay rights, it’s hard not to see these people as just wanting the human dignity that the rest of us have—whether that’s when it comes to death benefits or hospital visitation or child custody [or] tax issues.

Again, the politics of this is one thing, but I would just challenge members of my party to look at the faces at the right…[side] of your screen and ask yourselves if they deserve the same kind of dignity that the rest of us get to enjoy. You can argue with the Supreme Court’s rationale and whether or not they had the right to make this decision on behalf of individual states, but this is America. Those people are Americans and that is our future.

My party, which I deeply, deeply love…really has to reconcile with the fact that we are going to be become relics if we don’t get to where these people are. They are patriots. They are not asking for a lot. And it’s really time for the party politics to shift on this.

As far as Cupp’s argument about the Republicans embracing same-sex marriage, the next generation of conservatives may hold some hope for the future. In a survey of 150,000 freshman at 227 four-year colleges and universities across the country last fall, UCLA’s Higher Education Research Institute found that more than 56 percent who self-identify as politically conservative support same sex marriage.