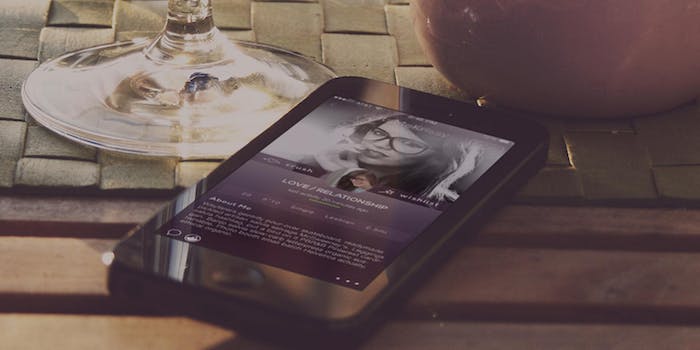 With Scissr, lesbians are a little less or more screwed

It can only get better.

For queer women, the landscape of dating apps is bleak—apocalyptic even. In 2014, OkCupid is little more than a mausoleum to dating catastrophes, only useful for messaging that ex about your shared Netflix login. Tinder caught on like wildfire in spite of not being queer-made or even very queer-friendly, though there’s little evidence that it’s anything more than an involuntary muscle spasm.

As an app “for lesbians, by lesbians,” Robyn Exton’s Dattch is a glimmer of hope on the grey, ex-ridden horizon, but a dating service is only as good as the depth of its user base and Dattch still needs to gain ground against online dating stalwarts that cater mostly to the straight dating scene. There have been a few other blips on the radar, and Scissr, an app by Chicago-based Allison Ullrich, might be the newest.

Ullrich, 36, created Scissr after struggling to navigate Chicago’s gay dating scene. With its in-jokey play on Grindr, Scissr already has the gay thing going for it, which is more than Tinder can say. Scissr is pre-launch at the moment, but doesn’t rely on geo-fencing to restrict the visible pool of heartbreaks waiting to happen, like Dattch does. It takes a bit of an OkCupid approach to profiles, inviting users to specify if they’re looking for love or a hookup.

On Scissr, it sounds like users can choose to identify as “lesbian, bisexual, or curious” though how transgender and genderqueer friendly the app will be remains to be seen (we’ll hope for the best). And hey, even if the app is unusable, the name alone elevates it to the lofty, wholly uncompetitive ranks of the top five lesbian dating apps ever created—so that’s something, sort of. Ullrich plans to launch Scissr in the next week or two, so we’ll have to see for ourselves.