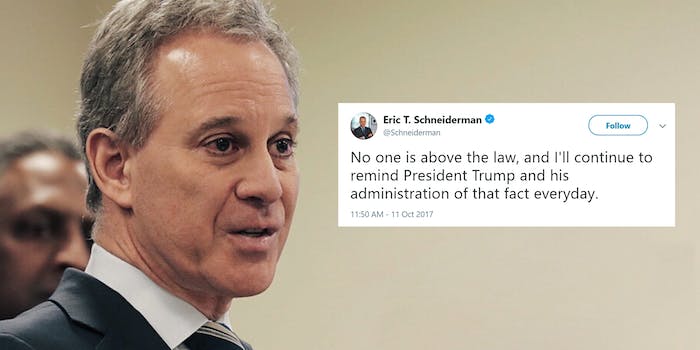 They loved the hypocrisy.

The New Yorker detailed accounts of four separate women who all described violent behavior by Schneiderman, including one who said he threatened to kill her if she left him.

The news was a shock to many, as Schneiderman had been a prominent progressive advocate and vocal supporter of the #MeToo movement, including pursuing charges against Harvey Weinstein after reports of his abuse broke.

That hypocrisy caused an eruption of glee from conservatives. Not because an abusive man was exposed, but because he was a champion of progressive causes.

Make no mistake. @AGSchneiderman was not involved in “consensual role-play.”

He’s a sick sadist who beat women, then threatened them with the power of his office. How many other lives did he ruin to satisfy his perverse desires?

Eric Schneiderman spoke at the @WomensMarch

Let that sink in pic.twitter.com/K5dKTEAvIc

It was something even the president’s son got in on.

President Donald Trump, in his time as a real estate developer in Manhattan, frequently attacked Schneiderman on Twitter, at one point calling him worse than Anthony Weiner.

Weiner is gone, Spitzer is gone – next will be lightweight A.G. Eric Schneiderman. Is he a crook? Wait and see, worse than Spitzer or Weiner

That Schneiderman was a staunch supporter of progressives in the Resistance-era brought up what conservatives think is a fundamental paradox of the recent outing of sexual predators and violent men, as many have been supporters of and heroes to the left.

Getting especially dragged was an old Samantha Bee segment on Schneiderman.

Some in the Resistance really put a lot of faith in this man…https://t.co/XcVShKpJlJ