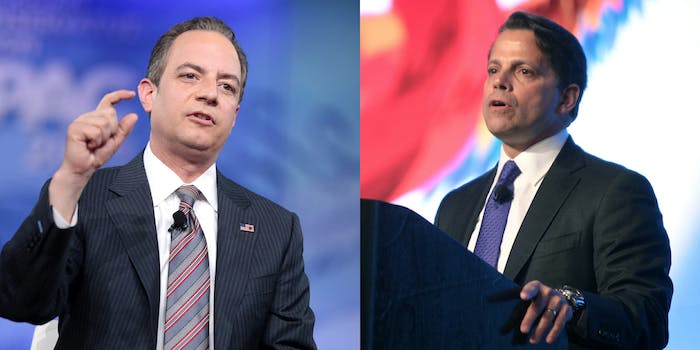 Anthony Scaramucci reportedly has a crude nickname for Reince Priebus

It's something you'd hear on a middle school playground.

It’s also not a secret that Scaramucci often refers to Priebus using foul language—as evidenced by his expletive-laced tirade the New Yorker published on Thursday.

But Scaramucci’s nickname for the chief of staff is a play on words that is akin to something you’d hear on a middle school playground:

The Washington Post reported last week that Scaramucci had a “crude nickname” he used for Priebus in private conversations with associates and the Daily Beast followed that up by confirming that, yes, the nickname is “Reince Penis.”

Scaramucci clearly has no qualms over bad-mouthing Priebus—calling him a “paranoid schizophrenic, a paranoiac” during the New Yorker interview.

But it didn’t stop there. The new communications director, whose attempt at propping up Trump’s golf skills during his first on-air press conference was changed to be more flattering in an official White House transcript, also seems convinced that Priebus is a leaker in the White House, which he has become fixated on since joining Trump’s administration.

During the New Yorker interview, Scaramucci threatened to fire his entire staff to find leakers—before pivoting to Priebus.

“They’ll all be fired by me,” he said. “I fired one guy the other day. I have three to four people I’ll fire tomorrow. I’ll get to the person who leaked that to you. Reince Priebus—if you want to leak something—he’ll be asked to resign very shortly.”

I think we’re all hoping that “Reince Penis” comes out mistakenly during Scaramucci’s next on-camera interview.