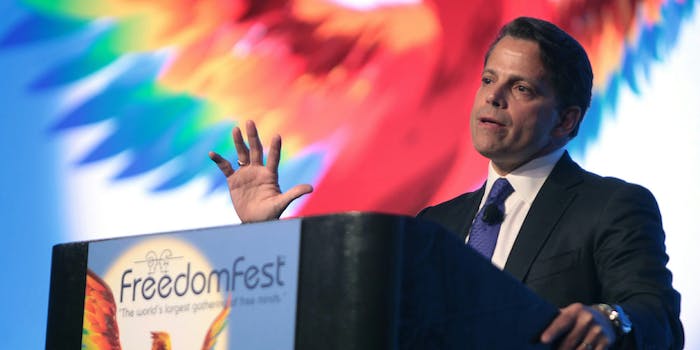 It's been a rough day for the Mooch.

Anthony Scaramucci‘s career in White House communications might be dead, but he hasn’t actually died—contrary to his listing in the Harvard Law School alumni directory.

The Boston Globe reported on Monday evening that the former White House employee, who was abruptly fired after only 10 days on the job, has an asterisk next to his name in the directory, denoting that he had died since the last directory came out in 2011. Scaramucci graduated the law school in 1989.

“Regrettably, there is an error in the Harvard Law School alumni directory in the listing for Anthony Scaramucci,” a spokesperson for Harvard Law School told the Globe. “We offer our sincere apologies to Mr. Scaramucci. The error will be corrected in subsequent editions.”

On Monday, the short-tenured communications director was ousted from President Donald Trump‘s administration after a tumultuous week and a half. Upon his hiring, former White House Press Secretary Sean Spicer resigned in protest and things only got crazier from there.

The White House changed the official transcript of Scaramucci’s first press conference to make Trump’s golf skills more flattering, then Scaramucci threatened to “fire everybody” on his staff in an effort to snuff out leakers, which he accused former Chief of Staff Reince Priebus of being. Shortly after that, the New Yorker published a profanity-filled interview with Scaramucci where he trashed colleges with colorful language. Priebus resigned on Thursday.