Big-hearted donations roll in for victims of a massive robbery.

Traders of the hot new canine cryptocurrency Dogecoin were recently dismayed to find themselves the victim of the market’s first major hack—and on Christmas, of all days. But true to the shibe’s noble spirit, they’ve banded together for an inspiring recovery effort: Save Dogemas.

The attacks on storage hubs Dogewallet and Instadoge.net, carried out by a group known as #team-ooga, resulted in the loss of at least 30 million Dogecoins, worth at least $10,000 and possibly twice as much. That pricing volatility is no doubt part of what makes the Save Dogemas reimbursement scheme possible, as it relies on the generosity of those in possession of nebulous dogecoin fortunes. In short, it’s an attempt to reimburse a bunch of swindled noobs. As the related post on Reddit’s /r/dogecoin has it:

We need your help! Dogemas is a magical time, but the hacking of Dogewallet and Instadoge ruined many shibes’ holiday. This community is special; helpful, generous, enthusiastic, but also less experienced with cryptocurrencies. We have many first time users of crypto-currency because our user-friendly community is bringing many new shibes to the coin world. In order to reach the moon we have to take care of each other and keep the spirit of community and faith in each other and the services that help spread the love of dogecoin.

The refunding effort will take place over the 12 days of dogemas, carrying it through early January, but 3.6 million dogecoins—more than 10% of the thieves’ take—has already been recovered. 1.5 million came in a single donation from Redditor blablablablabla78, while others have chipped in much smaller amounts, though it’s worth mentioning that anyone willing to part with 10,000 dogecoins for the cause (about $7) will get a 10-pack of sweet dogecoin stickers. 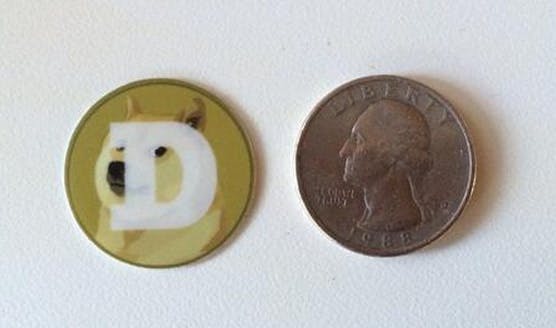 Such commitment to charity and goodwill, not to mention lighthearted fun, stands out as a rarity in the chaotic, cutthroat world of Internet economics. “This type of generosity is non-existent for Bitcoins,” wrote one Redditor, adding, “I honestly love this community.” Indeed, victims of other cryptocurrency scams or robberies have little recourse in recovering their money, “tough luck” being the standard sentiment. Not so for the fluffy, friendly, and ever-positive shibe.

If Save Dogemas manages to hit its target and assure any rattled amateurs that security holes can be patched with random acts of kindness, it will have done more than tighten the bonds between this wholly unique field of investors: it’ll also be proof that dogecoin is too big to fail. Until the next big heist, anyway. I may just liquidate my account and put everything into a meme-based economy that better suits my temperament. Has someone invented ragecoins yet?